Mizuno, the Japanese golf equipment manufacturer long renowned for its industry-leading golf clubs and product innovation, has reported record sales figures for the half year (April-September 2017) across its golf operation for the EMEA region, with significant year-on-year growth in nearly every product category.

The incredible reaction to the three new MP-18 iron models has helped Mizuno’s EMEA (Europe, Middle East and Africa) golf operation deliver a record first half by volume and margin sales, with nearly all product categories showing significant year-on-year growth. Gross sales we up 26% YOY, while gross margin sales were 21% up YOY.

“There is some real momentum behind the Mizuno brand at the moment,” said Rob Jackson, Head of Golf EMEA. “With this year being an MP iron launch as opposed to JPX Series with its wider appeal, these sales figures have surpassed all our expectations. We have picked up some real momentum and traction on tour and that has fed all the way through to retail. It goes to show what can be achieved with great product when all elements of the marketing mix come together.”

Mizuno, founded in Osaka, Japan, in 1906, has long held an enviable industry- and tour-wide reputation for crafting the very finest irons on the market, whether the more widely playable JPX Series or the fabled MP players’ models in recent years.

The arrival of the new MP-18 Series irons has undoubtedly helped the brand’s EMEA Golf operation achieve this excellent first half performance, during a year in which Mizuno has also enjoyed incredible success on tour, with more and more top professionals switching to Mizuno irons out of choice.

Mizuno’s amazing run of success on tour in 2017 has seen its irons being played by the winner of the US Open, then by three separate winners, including staff players Mi Hyang Lee and Jhonattan Vegas, across the world’s Major tours the same week in late July, and then by the winner of the Ricoh Women’s British Open at Kingsbarns.

At the recent Alfred Dunhill Links Championship, Mizuno irons were played by five of the top seven finishers and were also used to make history at the Home of Golf, helping to set a new course record of 61 at the Old Course, St Andrews. 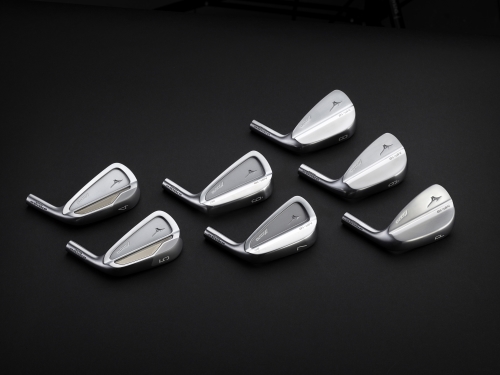 The trend follows a recent survey of tour players by renowned publication Golf World, which revealed that 36% would play Mizuno irons if there were no sponsorship money involved – far higher than any other manufacturer.

“These continue to be extremely exciting times for the Mizuno brand,” concluded Jackson.

The launch of the new MP-18s has heralded a new era in players’ irons. With three distinct models and head types, there is greater scope than ever before for better players to mix and match models to create the perfect set for their needs. Grain Flow Forged in the brand’s exclusive Hiroshima plant and refined by Mizuno’s renowned master craftsmen in YORO Japan – including the legendary Turbo – the MP-18s are ‘irons to touch the soul’ and have been designed to find the artist in every player.

With a fast turnaround on all new custom clubs, Mizuno has strived to “create the best products for consumers” for 111 years, and the new MP-18 Series irons adhere firmly to that original spirit and desire, while offering the best performance benefits that modern technology can bring. #nothingfeelslikeamizuno

For more information on the MP-18 Series irons, and Mizuno’s full range of golf equipment, apparel and accessories visit: golf.mizunoeurope.com