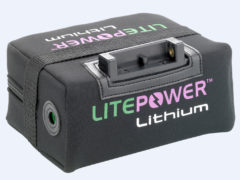 Motocaddy has acquired a significant shareholding in LitePower Limited that has seen it become the first trolley manufacturer to offer golfers a replacement Lithium battery designed for use on any powered trolley on the market.

Under the new agreement, LitePower will offer the lightweight 18 and 36 hole Lithium batteries, which will be distributed by Motocaddy’s sales team with prominent point of sale material and marketing expertise.

The deal was announced by Motocaddy Chairman, David Wells, who said: “This is a major step that Motocaddy is taking in the replacement battery market and one we believe will be equally welcomed by retailers as well as existing electric trolley owners.”

LitePower has become a leading supplier in the replacement Lithium battery market after it was founded two years ago by current Managing Director Cris Simpson, who said: “Motocaddy is the ideal company to help us grow the LitePower brand due to its dominance in the electric golf trolley market. Our aim is to fully establish LitePower globally as the leading supplier of Lithium batteries and in Motocaddy, who is offering capital investment as well as increasing sales distribution, we have the perfect partner.”

With a lifetime five times longer than a standard lead acid battery, the LitePower Lithium weighs only 2.2kg and is 75% lighter. Designed to fit any mainstream trolley through a universal connection system, the battery also comes with a specially developed charging unit that fully charges the battery from empty in less than 4.5 hours.