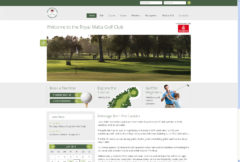 Royal Malta GC has recently switched all its club administration software over to M H Systems, one of the pioneers of progressive golf club software systems in the UK. Royal Malta is just one of a number of clubs switching to M H Systems.

Royal Malta GC is celebrating its 125 year anniversary this year with representatives from many other Royal golf clubs around the world, and as part of the long term investment in updating and refurbishing the clubhouse for 2013, club resources and members’ facilities, the club decided to upgrade the club’s technology.

After receiving several recommendations from some golf clubs in the UK, M H Systems was selected. The on-site installation and training was handled personally by Chris Ward, Golf Products Manager for M H Systems, who explained the thinking behind Royal Malta GC’s decision.

“The club’s committee was particularly concerned to make sure that the support they would receive would be at least as good as the software,” he said, “so they contacted some clubs in the UK, one of which was a high profile private members’ club. This particular club’s feedback was that our software was not only robust and ‘did what it said on the can’, but was very well supported.

Ward continues, “A major innovation for Royal Malta GC is that in the near future, all their members will be able to access our well proven ‘web services’ feature by going onto the club’s excellent new website (www.royalmaltagolfclub.com), developed by Malta’s leading brand marketing consultancy Mangion & Lightfoot. This will take them to their own personal page with their latest handicap, competition results and soon, their bar card balance in real time.

Ward underlines the importance of members having access to their own data. “In a club like Royal Malta with a lot of social functions as well as casual golf,” he said, “this innovative feature really helps ensure each member knows how much they’ve got on their card. In turn this helps them decide if they need to top it up, saving a lot of time and potential embarrassment were they to go to one of the bars and be told there was ‘insufficient funds’, sir!

As someone with long experience of the golf club management scene, Ward believes in innovative technology. “While in the UK customers of M H Systems have been enjoying the advantages and benefits of this feature for some five years,” he comments, “we believe this is an online innovation many other clubs and their members deserve.

M H Systems has also been keeping an eye on app developments as well, as Ward explains, “Now that smartphones are the preferred way to go online and members are expecting more value from their membership,” he says, “we are now developing an app version of our web services as part of the next major upgrade of our software for golf clubs.”