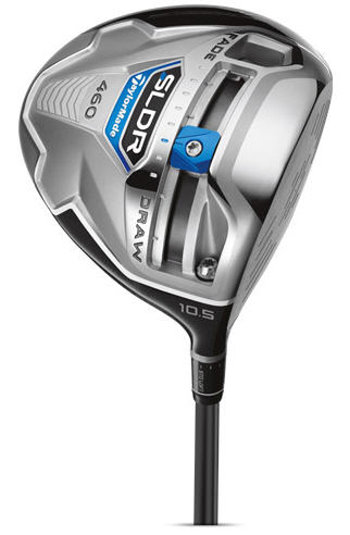 Today’s Golfer placed SLDR as the king of the big sticks with the best cumulative scores across Looks, Feel, Performance, Sound and Forgiveness; a total of 45 points out of a possible 50. The panel of independent testers, which is made up of a range of golfers with mixed handicaps, put 27 drivers through rigorous examination at the state-of-the-art testing facility at The Belfry and were impressed with the low and forward centre of gravity technology.

The latest award completes a trio of accolades for TaylorMade, with the SLDR being crowned the “2014 Most Wanted Driver” in the much coveted MyGolfSpy awards and also making history as the only driver ever to earn full marks, scoring 20 out of 20 in the 2014 Golf Digest “Hotlist” equipment issue recently.

Designed to help a player hit longer/straighter drives by promoting a high launch angle, lower spin-rate and faster ball speed, TaylorMade is challenging golfers to ‘loft up’ throughout its family of Metalwoods. Since its launch in July 2013, the SLDR has quickly emerged as the dominate driver on Tour with many players increasing their loft to achieve greater control, more consistency and significant distance gains.

Some of the Tour Players lofting up, include:

On becoming the only man to win back-to-back tournaments wins at the Dubai Desert Classic, Stephen Gallacher pointed to his 11 degree SLDR as the single biggest factor in retaining his crown.

The Scotsman said: “The 13th and 18th holes clinched it for me. In previous years’ I had to sacrifice shots by taking my 3-wood off the tee as I couldn’t clear the trees. Now, with my new higher lofted SLDR driver I’m seeing much higher launch conditions and greater distances. I sailed the trees and this gave me the chance to out-do some strong scores.”

The strong momentum behind SLDR comes on the back of another strong year for TaylorMade, with the business gaining #1 status in Metalwood in 2013 for sell through in both Sales Value and Units across UK, Germany, France and, for the first time, in Sweden.

The success was also reflected across its iron range, with the revolutionary new SpeedBlade iron helping secure #1 status in Irons from a brand perspective in 2013 for sell through in both Sales Value and Units in the UK and France and Units in Germany.

“The SLDR is an absolute game changer. This is proven by all the recent independent testings, the feedback from our Tour players and from what amateur golfers are telling us,” said David Silvers, Managing Director of TaylorMade EMEA.

“We are seeing golfers increasing their loft and gaining not only big yardage gains, but also greater control. When you can hit your tee shot higher with little spin, the ball is going to carry longer and hit the ground running. 2014 isn’t just a replacement cycle, we believe it’s an innovation cycle – those golfers without low and forward CG placement are going to get left behind. Simple as that”.

Market share claims for the UK based on independent research conducted by Golfdatatech in the combined on and off course channels during 2013.

Market share claims for Germany, France and Sweden based on independent research conducted by Sports Marketing Surveys Inc’ in the combined on and off course channels during 2013.