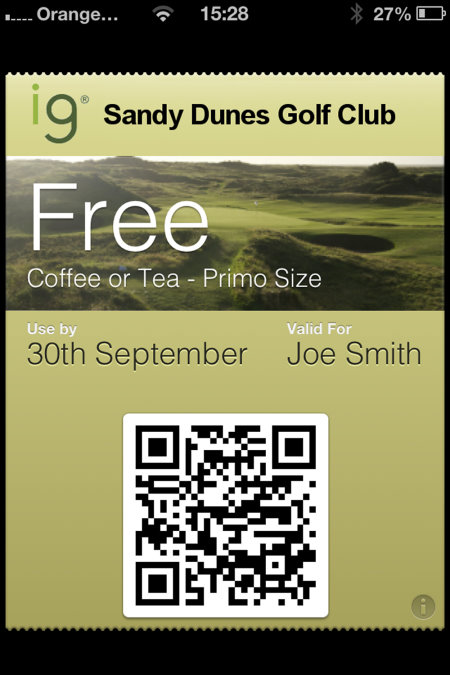 Less than 24 hours after Apple released its iOS 6 operating system software, the Warwick-based company announced that golf clubs can already take advantage of one of Apple’s most talked-about and powerful new features – Passbook.

Use intelligentgolf’s web-based management software to generate individual QR-coded vouchers, golf clubs can now issue single-use, trackable vouchers to golfers on their email lists, without fear of the vouchers being used more than once by different people. In practice, this means a golf club can offer golfers a free cup of coffee, two for one on a guest green fee, or any other promotion – safe in the knowledge that the offer cannot be abused.

The QR codes are unique to each recipient, and the number of emails which can be sent with unique QR-coded vouchers is unlimited. Once used, the QR code is automatically cancelled, and the golf club receives management information about the code’s use including who used it, and when.

Additionally, if the golfer adds the QR-coded voucher to his/her new Passbook app, Apple’s software automatically detects when the golfer reaches the golf club, and prompts them to use it via an on-screen message.

“This means that UK golf clubs will be among the first businesses in the UK to take advantage of Apple’s new Passbook feature,” said intelligentgolf managing director Jamie Abbott. “Apple is renowned for its bringing rich new functionality to users, but in a very easy to use way. Passbook is the latest such innovation, and it is wowing the world, this week. With Apple dominating technology news following its launch of iPhone 5 and iOS 6, we are delighted to be able to bring this major new function to our golf club customers so close to the launch.

“We are fairly sure that golf clubs who use intelligentgolf will find this new functionality helps to end the commonplace fear of people abusing printed promotional vouchers, re-using them or giving them to friends, when they were actually meant to be one-time-only offers.”

The new Passbook features are available to all golfers with an iPhone running the new iOS 6. iPhones from the 3GS and newer can upgrade to the new operating system for free.