Huxley Golf swings into action at The Open 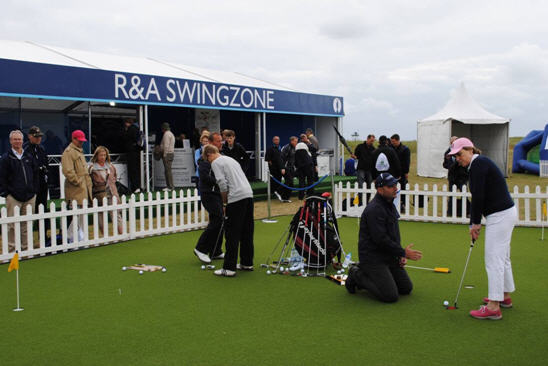 Spectators at The Open Championship at Royal St George’s gave their game a boost thanks to a large all-weather Huxley Golf putting green. The green was part of The R&A’s Swingzone which also sported two triple-bay Huxley Golf practice nets with mats.

PGA professionals used the facility to give expert tuition to fans who visited The Open Championship.

Alison White, Assistant Director of Golf Development at The R&A, said: “The large all-weather putting green supplied and installed by Huxley Golf for The R&A Swingzone at The Open at Sandwich this year was a welcome addition to the facilities used by the PGA teaching professionals present. It allowed additional lessons to be given outside of the teaching bays, thus increasing the coaching available to visitors. The PGA professionals were very impressed by the quality of surface that was provided.”

Huxley Golf, the PGA’s official supplier and installer of premier all-weather putting and chipping greens, provides surfaces for golf around the world.

Clients include training and coaching establishments, golf resorts, ranges and academies as well as many well known courses including several Open Championship and Ryder Cup venues.

Huxley Golf is an official supplier to the PGA, the English Golf Union’s National Golf Centre at Woodhall Spa, the Golf Union of Wales and the Scottish Golf Union. A division of the Huxley company founded in 1946, Huxley Golf aims to provide the best possible products, the highest installation standards and the best customer care from advice on product suitability to post installation maintenance. The Huxley Golf team includes a growing network of appointed distributors for the various products in the United Kingdom and overseas.