GOLFZON, a leading provider of golf simulators  – www.golfzongolf.com – is presenting its state-of-the-art golf simulators and offer quick, free golf lessons to spectators this week (July 16-22) at The 147th Open at Carnoustie Golf Links. 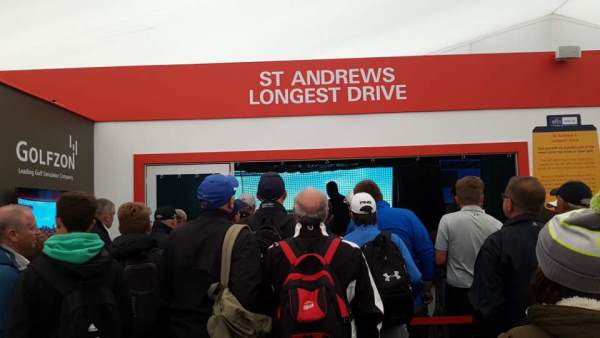 Located in the Spectator Village’s R&A Swingzone, there will be two GOLFZON Vision Compact simulators in place for a team of PGA professionals to provide free lessons to spectators. Lessons began on Monday, July 16 and run through the completion of the competition on Sunday, July 22. The Spectator Village is situated near the first tee and 18th green, the No. 1 Spectator Entrance and adjacent to the Media Centre and includes a number of food and beverage offers, a dedicated children’s play area and giant TV screens to keep up with the tournament action.

“GOLFZON is always excited to engage with fans at The Open and show them the possibilities of playing golf on simulators,” said Tommy Lim, CEO of GOLFZON America. “GOLFZON’s partnership this year with The R&A offers an opportunity to provide lessons from PGA professionals and show yet another dimension of what GOLFZON simulators can do to improve and enjoy the game. This event and at other venues around the world continue to focus on our effort to make the game fun for everyone.”

GOLFZON officially launched its Vision Compact simulator this summer, a new product which debuted earlier this year at the PGA Merchandise Show. The Vision Compact is a smaller version of the highly touted GOLFZON hardware, with a less expensive price point and easy installation but the same wide range of simulator capabilities which earned GOLFZON the Golf Digest Editors’ Choice Awards in 2017 and 2018.

In 2017, GOLFZON had a successful stint during The 146th Open at Royal Birkdale. There were simulators on site for closest to the pin and long drive contests as the tournament drew record crowds for the world’s oldest major golf championship. GOLFZON Ambassador Matt Kuchar also battled eventual Champion Jordan Spieth on the weekend before finishing second, his best finish in a major championship.

Since 2015, GOLFZON has had its simulators on site and in close proximity to The Open Championship venues. GOLFZON made its debut at The 144th Open at St. Andrews, Scotland in 2015.