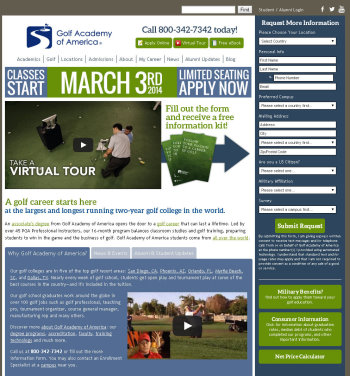 The brainchild of a California educator who recognized a void in golf industry education, Golf Academy of America celebrates its remarkable 40-year history in March 2014.

“It’s been an amazing journey,” said Golf Academy of America president Jim Hart. “When you look at our modern facilities led by PGA instructors, it’s hard to fathom how it all began.”

Golf Academy of America plans to recognize its anniversary in several ways, including online contests and an anniversary golf event.

An 80-percent job placement rate for graduates is a major factor in Golf Academy of America’s success.

Schwartz, a community college administrator, founded San Diego Golf Academy with the help of two partners. Campuses were added, beginning with Orlando in 1986 then Phoenix and Myrtle Beach, S.C.

Schwartz’s daughter, Dana Powell, and her husband, Peter, sold the company in 2006 to Education Corporation of America. A fifth campus opened in Dallas in 2012.