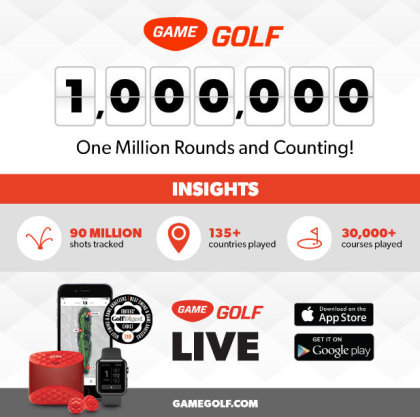 How popular are digital shot trackers becoming in golf? Hitting a major industry milestone, GAME GOLF’s products have become the first to track more than one million rounds of data from amateur and professional golfers around the world.

“Never before has there been any data on how amateur golfers actually play the game,” said John McGuire, CEO of GAME GOLF. “With this much data, captured on a global scale, we are the only company that has a true picture of what people are doing on course. We have information on their strengths, weaknesses, how they play each course, where they can improve and more.”

GAME GOLF created the stat tracking category with the launch of GAME GOLF Classic in Spring 2014, proving to golfers how tracking their stats can help shave strokes off their games by better understanding their strengths and weaknesses on the course.

GAME GOLF LIVE is the company’s award-winning and most advanced golf shot tracker. It operates in real time to track and analyse a golfer’s game. It is the only shot tracker that is allowed in competition play under the Rules of Golf issued by the USGA and R&A and is being used by golf professionals like Graeme McDowell, using it days before the Masters to help gain an edge on the Augusta course.

GAME GOLF LIVE uses GPS motion sensor tags and near-field communication technology that is attached to the tip of the golf club grips and a lightweight device that is worn on the player’s belt. Golfers pull a club from their bags, touch the tag to their GAME GOLF device or Android phone, and hit their shots. GAME GOLF captures robust data on each shot that is instantly visible on the GAME GOLF app, on any iOS (iPhone) or Android phone, smart watch (Apple and Pebble, Android Wear coming soon) or computer.

94 percent of all golfers under-club

Among the million rounds of data, two surprising trends have emerged. The first is that 94 percent of all golfers under-club. “GAME GOLF is valuable because you can’t fool data,” said PGA Professional Graeme McDowell who has been involved with the company from its very beginning. “The professionals have ShotLink IntelligenceSM to tell them how they’re playing. Now, amateur golfers can really see how they’re doing and can adjust their games. So, when the data says that you consistently misjudge distances, make good use of the powerful built-in rangefinder to know how far you need to hit the ball, and pull one club longer to make a better shot.”

A second major finding is that young golfers (under age 19) are the most accurate drivers in the game with 55 percent of them hitting fairways off the tee.

“We literally track every aspect of your game, from true distances of each and every club, location of every shot, fairways hit, greens-in-regulation, putts per hole, and the accuracy and distance of shots off the tee and on approach and much more,” added McGuire. “Once you know how you’re actually playing, you can focus on improving.”

The PGA of America and Golf Channel are partners in the brand that is used by PGA Pros Graeme McDowell, Jim Furyk, Lee Westwood, and Chesson Hadley, LET Pros Sophie Walker, Olympic contender Maria Verchenova, professionals and students at Golf Channel Academies, the Hurricane Junior Golf Tour and others.

For more information or to view videos of GAME GOLF in action, visit GAMEGOLF.com