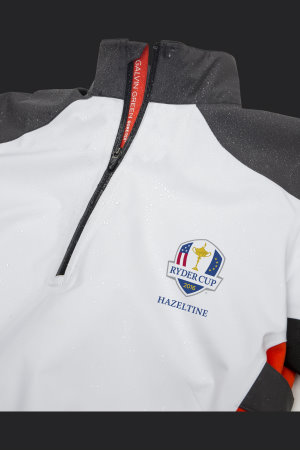 Galvin Green has become the Official Team Supplier of Outerwear to the 2016 and 2018 European Ryder Cup Teams.

The iconic high performance brand, which dominates Europe’s biggest golf rainwear market and supplies golfers in more than 20 countries worldwide, has taken the opportunity to become an exclusive provider of outerwear to the Ryder Cup Team for the first time.

It has been selected to supply its premium waterproofs to the 12 team members representing Europe at Hazeltine National in Minnesota next year (27 Sept- 2 Oct), with the same garments being worn by Team Captain Darren Clarke, his Vice Captains and caddies. The waterproofs will also be supplied to the European Team for the 2018 Ryder Cup matches scheduled to be played at Le Golf National near Paris.

Galvin Green will provide the 2016 European Team – looking to equal the hat-trick of wins Europe enjoyed in 2002, 2004 & 2006 – with rain suits that will be extremely lightweight, flexible, breathable and stylish in design. These outfits will also be made available to the wider golfing population after the 41st Ryder Cup contest ends in October next year.

The fast-expanding Swedish brand will also retain the License for producing a dedicated Ryder Cup collection for regular golfers that it introduced with great success ahead of Europe’s triumph at Gleneagles last year. The new collection is scheduled to be launched before the 2018 event in France, when The Ryder Cup returns to Continental Europe for the first time in 21 years.

Commenting on the appointment, Richard Hills, European Ryder Cup Director, said: “Ryder Cup Europe is delighted to have Galvin Green as one of its Official Team Suppliers for the European Teams in 2016 and 2018. Its garments proved to be very popular when part of the official Ryder Cup range at Gleneagles and we are particularly pleased to have one of the most sought-after outerwear brands in golf supporting Europe when they defend the trophy next year.”

“We are extremely proud that Galvin Green has been selected to provide outerwear clothing to Europe’s finest players competing in the biggest team event in golf,” said Mike Johnson-Hill, Managing Director of Galvin Green UK & Ireland. “As a leading European brand that is entirely dedicated to golf, we value this new association a great deal and intend to give Europe’s players the most outstanding waterproof garments that new technology will allow.

“According to local weather forecasts, there is a chance of light rain or drizzle falling in the Minneapolis area on any given day during late September and October, so team members may well need to pull on their Galvin Green waterproofs to perform at their best,” he added.

Up to three different fabrics are currently under consideration for producing The Ryder Cup rain suits, including one that offers the benefits of a brand new technology. Samples of these fabrics are being tested by GORE-TEX® technicians in Scotland to meet the rigorous standards of protection and durability required. Each garment is subjected to a period of at least 50-hours of exhaustive testing in different playing conditions, including simulated heavy downpours in a rain chamber. The results will be scrutinised to determine the best option for producing up to six prototypes that are expected to be ready for play-testing one year out from the event itself.

“Our ambition is to create a thoroughly modern-looking, standout rain suit that has all the hallmarks of a traditional Galvin Green outfit in stretch fabric that offers great playability,” said lead designer Mats Lundqvist. “It will be a little bit different in appearance to anything seen before at The Ryder Cup, while remaining a jacket and trouser combination that makes the wearer feel good out on the course and able to play well in less than perfect weather.”

A decision on the final type of outerwear garments supplied to the European Team by Galvin Green has still to be made by the Captain. The jacket could take the form of either a full-zip or the half-zip version pioneered by the brand. It might also be a short-sleeved waterproof, rather than a conventional long-sleeved garment. Whatever the final outcome in terms of style, the ultimate jacket will feature the brand’s trademark quality water-repellent zips; adjustable collar, chest width and bottom edge; as well as streamlined tailoring to avoid any unnecessary material impeding the swing.

“The experience we gained creating of our own Exclusive Collection for The 2014 Ryder Cup was very important,” added Mats. “We were able to bring our appreciation of the event’s history and what proved to be the most popular waterproofs on sale at Gleneagles to the design brief and put forward the type of garments that we know will prove popular with players and spectators alike.”

The Sunday Times 100 list features profitable companies that are independent, privately-owned and UK headquartered; have sales over £5 million and have four years of accounts

GBN talks to Gary Favell, the chief executive of American Golf, about the company’s move into driving range and golf course ownership, the challenges and opportunities presented by the pandemic, and the future of golf retail in the UK