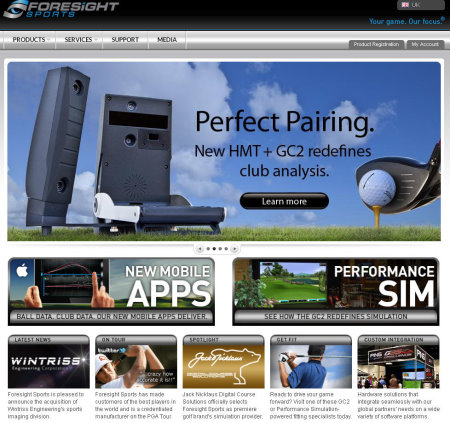 Callaway, Titleist, PING, the PGA of America and Golf Digest magazine were just five of the many big names in golf utilising Foresight Sports technology at last month’s PGA Show in Orlando.

Foresight’s GC2 and HMT, currently the most in-demand technology in golf, dominated the annual golfing extravaganza – and even benefited from the hugely well attended, weather-affected demo day, which saw its afternoon session disrupted because of high winds and torrential rain.

Foresight Sports Europe’s sales director Ed Doling, who led a large contingent of staff from this side of the Atlantic, explained: “It was really windy on the demo day but the great thing about the data on our machine is that it is always pure, accurate and not affected by the weather. It’s unique in that attribute.

“Our customers confirm this time and again. When working on windy days, or in bad weather, our data is unaffected by down-range conditions. If you hit a gentle fade into a right to left wind, then the GC2 reports that gentle fade perfectly. Our data is always pure as we directly measure the movement and spin of the ball. And that was certainly the feedback we got from the many visitors who came to our stand at the outdoor day. They appreciated that their data was spot on and unaffected by the gusts.

“Even though the second half of the day was a wash-out, the morning was great. There were GC2s and Foresight technology everywhere.”

Back inside the OrangeCountyConvention Center, the Foresight stand was the largest of all the technology companies at the show this year and the most impressive in the sector. But it wasn’t just on the company’s stand where the technology was in action. Foresight technology was ubiquitous across the show’s million square-feet floorspace: the adjacent Callaway stand had four simulators all running GC2 and HMT, and all incorporating Foresight’s fitting software; PING utilised a GC2 for its skills competition and club testing, as did the PGA of America to drive its daily nearest-the-pin event. And even Golf Digest magazine had it in the VIP area for guest use.

Doling added: “Foresight technology was also in use on dozens of other stands across the show floor. Because it’s so accurate, any time anybody wanted to demonstrate the before and after effects of their product they were using Foresight technology.

“This year’s show was without doubt the busiest and most successful for us to date – and everybody was talking about Foresight. There’s a real acceptance within the industry now that Foresight is the technology of the future. HMT is really driving that; everybody loves the GC2 and now accepts it’s the number-one technology out there, but HMT is the defining point where, when you see the club data it measures directly, you understand no other technology can get close to it. From the top professionals down, the top coaches … they are now moving to GC2/HMT because of the unique and revolutionary way our technology works: directly measuring ball and club data that no other system out there can achieve.

“Manufacturers bought into it years ago; their R&D departments are using GC2/HMT because it’s the only affordable technology that directly measures club-head data. If you’re building a golf club you need to know how the golf ball is going to react, and, when it does, you need to know where it was struck on the face. And you need to correlate those two things.

The US-based company is also taking things to a whole new level with the official launch in Orlando of the GC2-K Performance Kiosk, an all-in-one indoor/outdoor touchscreen kiosk with embedded GC2 technology, which is already being dubbed the ‘Range Changer’. The GC2-K, in conjunction with the company’s new line of cloud-compatible, 4K resolution gaming and skill-building software, FSX, is aimed at both existing and new golfers, allowing those already playing to evaluate and improve their game, while enticing non-golfers to ‘Get in the Game’.

The company’s GC2 and HMT are used and recommended by many of the world’s leading club manufacturers including Titleist, Cleveland/Srixon, Cobra/Puma, PING and TaylorMade and remains the best-selling launch monitor in the industry. Its portability and industry leading accuracy means the technology is also used by dozens of the world’s top touring pros and coaches.