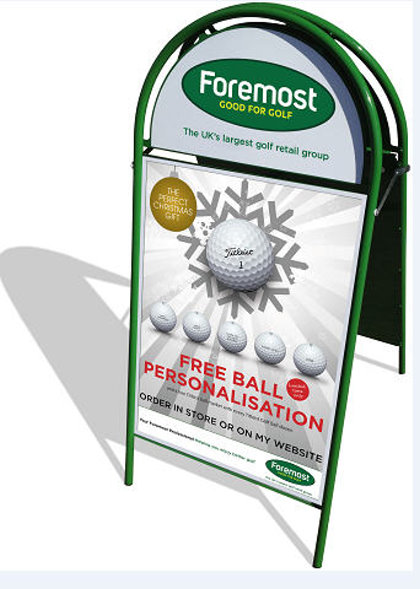 Foremost Professionals enjoyed record ball sales in the lead up to Christmas thanks to the huge success of the popular annual Titleist Ball Personalisation promotion.

Foremost participants sold over 5,000 dozen Titleist balls during the promotion which equates to a share of almost 45% of the total national sales through Titleist for the promotion across the UK.

230 of Foremost’s 305 EMP Professionals participated in the campaign and led the way by achieving record sales of 3,297 dozen Titleist balls. That 3,297 figure represents a 48% increase over the previous record of 2,222 achieved by the group’s EMP professionals during last winter’s promotion and accounted for 63% of sales achieved across the Foremost Group.

“The annual Titleist Ball Personalisation promotion is always popular and this year it has been more successful than ever before,” confirmed Foremost Company Director, Andy Martin.

“We have just crunched the numbers and they show a sales increase of almost 40% over last year’s record figures.

“Group sales are up 38% on 2013 while sales generated by our participating EMP members have increased by a massive 48% over the same campaign 12 months ago.

“Those sales figures are remarkable and what also stands out is the fact that during this year’s promotion our group of 230 EMP Foremost members managed to account for nearly 45% of the total sales achieved nationally across the GB & I,” added Martin.

“What is most important for us is that the campaign illustrates how our participating professionals are in fact increasing sales when there can be so much negativity in the industry especially in what are seen as the traditionally quieter months for green grass golf professionals. Our systems generate the online orders for our member professionals but the customers then collect conveniently from their professional shop”.

Commenting on behalf of Titleist, Spencer Manning, UK & Ireland Sales Manager – Titleist said; “2014 was a very strong year for the Titleist brand and our partnership with Foremost.  The Christmas Personalisation promotion was a great success for the Titleist brand with more golfers than ever choosing to purchase a dozen personalised balls for Christmas. The Foremost group, driven in the main by their successful EMP programme, once again played a pivotal role by achieving record sales levels. This latest achievement capped off an outstanding year for both Titleist and Foremost and we look forward to furthering our partnership in 2015”

Golf professionals can get more information about Foremost by contacting Matt Lacey on 01753 218896 or email matthew.lacey@foremostgolf.com.

More information about the EMP and details on how to join are available from Graham Starkey on graham.starkey@foremostgolf.com or by phoning 01753 218913