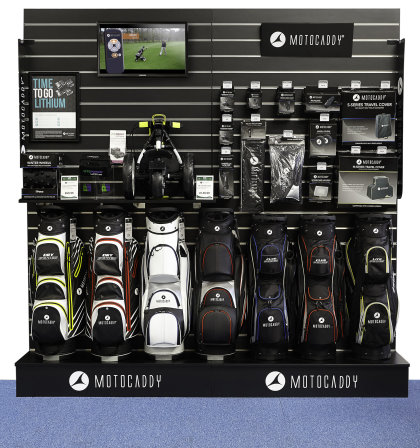 Since first partnering with Motocaddy back in 2012, Foremost members around the country have seen their electric trolley businesses boom, with group members having now generated an incredible £3 million in returned profits to their businesses from the brand.

With 2016 signifying the fifth year that Foremost has partnered with Motocaddy, the brand has seen total trolley unit share sales within the group increase from 22% in 2011 to in excess of 70% 2016 year-to-date. Motocaddy’s nearest competitor held share of 48% back in 2011, but this year holds a unit share of just 17%.

The £3 million barrier has been achieved with the help of the brand’s support of the Foremost group’s forward thinking Elite Marketing programme (EMP) which has helped communicate the strengths of the product range to the consumer. In particular, Motocaddy have led the move to lithium and also supported Foremost members with exclusive EMP campaigns such as the extremely successful ‘Battery Trade-in’.

From an already high base, in 2016 (Jun YTD) total Foremost member Motocaddy trolley unit sales have risen 5% YTD, with trolley sales ‘value’ up 3%. Similarly, total Motocaddy royalties (margin) paid to members is up an impressive 9%, with the gross margin that the brand’s electric trolleys are generating for Foremost members increasing compared with 2015, now 1.5% more than the nearest competitor.

The primary reason for this increase in profitability is that Motocaddy has reduced lithium trolley prices at retail, but kept the royalty values exactly the same as before. Subsequently, this has increased gross margin percentage for members as Motocaddy sales are now approximately 90% lithium, increasing overall profitability.

Commenting on the success of the partnership with Foremost, Motocaddy Sales Director, Neil Parker, commented, “We’re delighted to see that trolley revenue, units, gross profit and average unit profit have all increased for the Foremost members this season. The return on investment in this category continues to outperform all others, and the most outstanding success stories we hear consistently come from within the EMP membership.”

For further information on the Elite Marketing Programme, please contact Graham Starkey on 01753 218913 or email graham.starkey@foremostgolf.com.