Foremost Golf Looks to the Future 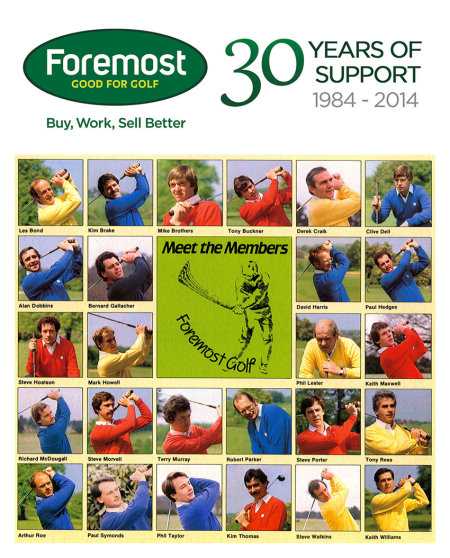 Foremost Golf reaches a major milestone in October when it celebrates its 30th birthday at its annual awards dinner at Golf Show 2014 in Harrogate.

It was established back in October 1984 when 26 PGA professionals formed a buying group operating out of a single room office in Burnham Beeches but it has since diversified considerably and its membership has grown to almost 1,000 spread across all four of the home countries.

“A lot of water has passed under the bridge since Foremost Golf was established back in October 1984,” confirmed founder member and current CEO, Paul Hedges.

“A few years before about a dozen professionals in the Berkshire, Buckinghamshire and Oxfordshire area had formed a loose alliance to leverage better deals from the major manufacturers. It proved very successful but we soon realised we needed a more formalised structure and that’s when Foremost Golf was formed with the help of Swedish consultant, JO Annemark.

“Tony Buckner, who at the time was the professional at Flackwell Heath, near High Wycombe, became the group’s first Chairman. Kim Thomas, then the pro at Stoke Poges (now Stoke Park), was enlisted as Managing Director and I took on the job as Financial Director before becoming MD in 1990.”

“Former Ryder Cup player and Captain, Bernard Gallacher, was one of our founder members and I’m delighted to say three of our other founder members are still actively involved with the group today,” added Hedges. “Steve Porter was at Hartley Whitley Golf Club when the group was established but moved to North Hants where he recently handed over the reins to his son, George. Clive Dell was at Ascot Golf Club and is now the professional at Oakdale GC in Harrogate, while Tony Rees was and still is (after more than 50 years) the professional at Oxford City Golf Club.”

All four founder members have witnessed massive changes over the past 30 years but one thing that has remained constant has been Foremost’s determination to stay ahead of the competition.

It was the first group of its kind to utilise a centralised invoicing system and the first to launch both its own magazine and Trade Show. It has been lauded for the manner it has embraced e-commerce and digital marketing and utilises both to provide members with a level of integrated support not seen elsewhere. It employs a dedicated team of business consultants to provide year-round assistance for its members and backs that up with a series of Spring Workshops where members can learn the skills needed to compete with on-line and High Street competitors. Significantly, it was also the first organisation to establish its own Golf Club Buying Group, set up in order to protect its members by helping its member clubs to operate more efficiently at a time when many are under more financial pressure than ever before. It has also been thriving and currently has just under 400 member clubs.

“I think one of the main reasons for Foremost’s success over the years is that we have always been innovative and entrepreneurial,” Hedges said. “That has helped us to set the trends rather than follow them and helped our members to keep ahead of the game. It is a great compliment when we see other groups trying to copy many of our initiatives.

Despite difficult trading conditions Hedges is confident Foremost Golf can continue to prosper in the decades ahead.

“I am more optimistic now than I was a few years ago,” he admitted. “Many people were saying that the Internet might put us out of business but, unlike many other groups, we have learned to endorse the Internet and it has become one of our biggest assets”.

“Fortunately, amongst our members, we have some of the best and most dynamic PGA professionals who are rising to the modern challenges and ensuring a successful future for both themselves and Foremost,” he added.

“There will always be a place for quality PGA professionals provided they are prepared to work hard, adapt to changing market conditions and deliver what the clubs and the golfers need.

“That’s what we have been doing for the last 30 years and there’s no reason why we can’t do the same for the next 30 years and beyond.”