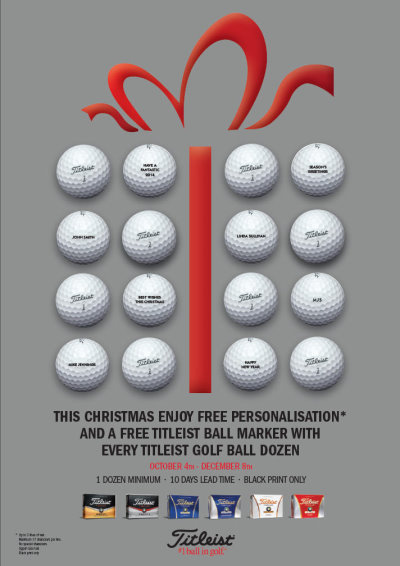 Foremost members sold very nearly 50,000 golf balls during the promotion but it was the Foremost members with their digital EMP and integrated retail solution that once again dramatically increased sales

All across the country EMP members enjoyed a lucrative run-up to Christmas as customers queued up to take advantage of the popular Titleist promotion.

Neil Morris and Tim Holden at Broome Park Golf Club in Kent were near the top of the sales chart having sold a staggering 65 dozen Titleist golf balls and Jeff Pinsent at Sandy Lodge in Hertfordshire who clocked up sales of 60 dozen.

“It has been fantastic to see the sales figures generated by the Titleist promotion in conjunction with the EMP retail solution and customers coming in through our member’s doors in December, when traffic flow for many can drop severely.”  commented a delighted Foremost Company Director, Andy Martin.

“Foremost members sold 3,828 dozen Titleist golf balls during the promotion which equates to a massive 35% of the 11,000 dozen balls that were sold nationally by all the retail outlets which took part in the promotion.

“That’s a hugely impressive performance but when you extrapolate the figures further you can see it was the 157 participating EMP members who were the real winners because they generated 22% of those total sales.

“That’s a scarcely creditable performance and it provides definitive proof of the sort of results our digital EMP integrated retail solution can achieve.”

Spencer Manning UK & Ireland Sales Manager – Titleist added “The Free Personalisation offer at Christmas continues to be hugely successful for us and the EMP solution has once again delivered exceptional results for its Foremost members.”

More information about the EMP and details on how to join are available from Graham Starkey on graham.starkey@foremostgolf.com or by phoning 01753 218913