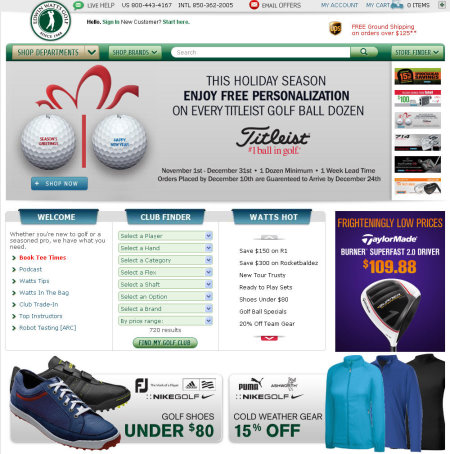 Edwin Watts Golf Shops, LLC (“Edwin Watts” or the “Company”) today announced it has entered Chapter 11 Bankruptcy Court protection in Delaware with the intention of selling the operating assets of the business. The Company and its advisors have been in advanced negotiations with multiple parties, prior to the bankruptcy filing, and expect to file sale agreement documents with the Court shortly.

All parties involved hope to have a Court approved sale transaction closed before the end of the year. Pursuant to the transaction, a significant number of Edwin Watts stores are expected to continue operating.  Final store counts have not yet been determined.

Edwin Watts President and CEO John Watson noted that the decline in the golf industry over the past five years has resulted in extremely sluggish consumer demand and that it experienced a particularly challenging first half of 2013 due to poor spring weather, the impact of Hurricane Sandy in the northeast and a poor Florida golf season.  In total, year over year golf rounds were down nearly 15% in early 2013 according to the National Golf Foundation. These challenges have led to a further erosion of the Company’s financial position during 2013.

A sale transaction was determined to be the best course of action available to the Company. Edwin Watts is represented by the law firm Klehr Harrison Harvey & Branzburg. Its financial advisor is FTI Consulting and investment banker is Farlie Turner & Co.

Edwin Watts Golf Shops, LLC is one of the world’s premier specialty golf retailers. The Company operates as an integrated, multi-channel retailer, offering an assortment of brand name golf equipment, apparel, and accessories through over 90 domestic Retail Locations, its internet site, direct mail, and through its online catalogue. The Company is headquartered in Fort Walton Beach, Florida.