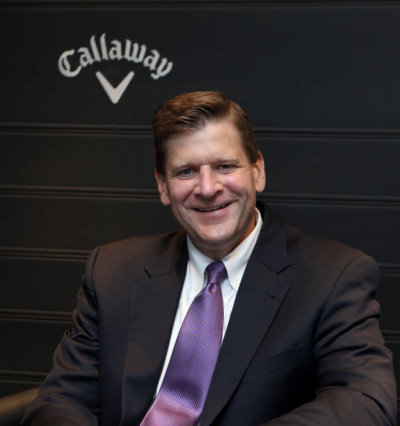 Callaway Golf Company Announces 22% Increase in Sales and a 30% Increase in Earnings For The First Quarter Of 2014; Reiterates Financial Guidance

Additionally, income from operations increased 54% to $62 million and fully diluted earnings per share increased 30% to $0.61, both driven by the increased sales and improvements in gross margins of 160 basis points, which more than offset an increase of $13 million in operating expenses and a $9 million decrease in other income.

The 2014 results benefitted from a $4 million decrease in pre-tax charges related to the cost reduction initiatives that were completed in 2013. The Company was able to achieve these significantly improved financial results despite adverse changes in foreign currency rates, which negatively impacted 2014 sales by $6 million, a $9 million dollar decrease in other income/expense resulting primarily from adverse changes in foreign currency contract values, and a $4 million increase in stock compensation expense as a result of increases in the Company’s stock price.

For the first quarter of 2014, the Company reported the following results, as compared to the same period in 2013: 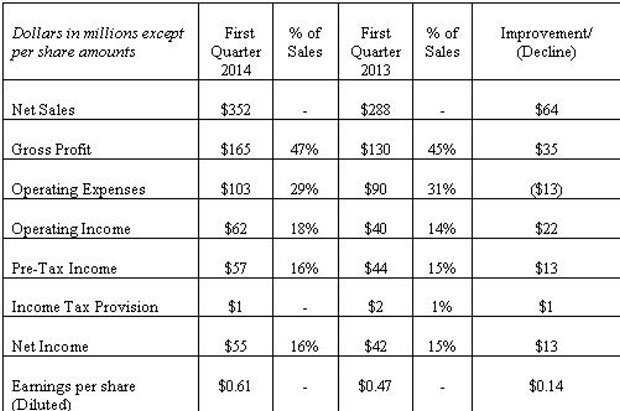 In addition to the increase in sales, gross margins improved 160 basis points compared to last year due to improved pricing and sales mix, the completion of the cost-reduction initiatives in 2013, and productivity improvements resulting from several initiatives implemented last year, all of which more than offset the negative impact of foreign currency exchange rates and increased product costs associated with additional technology in several new products.

Operating expenses increased $13 million due to increases in marketing support for new products launched during the quarter, an increase in stock compensation expense associated with a 54% increase in the stock price compared to March 31, 2013, and planned incremental tour investment.

As a result of the increase in net sales and improved gross margins, which more than offset the increase in operating expenses and foreign currency contract losses, earnings per share for the first quarter of 2014 increased 30% to $0.61 compared to $0.47 in 2013.

“We are pleased with our results for the first quarter,” commented Chip Brewer, President and Chief Executive Officer. “These results reflect our continued brand momentum and the success of the first stage of our multi-year turnaround plan.   In particular, our renewed focus on more consumer-oriented products has resulted in double digit sales increases in our woods, irons and golf ball product categories, resulting in a 22% increase in net sales for the quarter and market share gains in each of our key markets around the world.”

“As evidenced by our recent results, we are now clearly seeing the benefits of the many changes we have made at the Company as part of our turnaround plan,” continued Mr. Brewer.  “We believe that our turnaround plan is firmly on track and that we are laying the proper foundation for a sustained recovery over the long-term. With that said, in the short term, we are anticipating very challenging market conditions for the second quarter and possibly the balance of the year.  The golf market has been slow to open in many regions where we conduct business, including our largest region, the United States, which continues to have unfavorable weather in many parts of the country.  In addition, overall retail inventory levels are high and we anticipate a heavy promotional environment while the industry works through the excess inventory.  We are maintaining our full year guidance, but if the golf market does not open shortly or the promotional activity is heavier than we anticipate, we would expect to be at the low end of our earnings guidance.”

The Company is maintaining its financial guidance for the full year 2014, but notes that if the golf market does not open shortly or if promotional activity is heavier than anticipated the Company would expect to be at the low end of the earnings guidance.  The guidance previously provided is as follows: