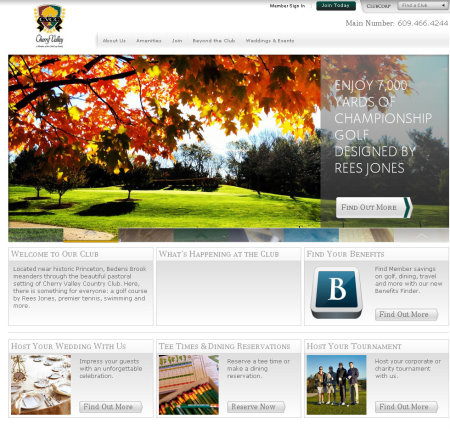 ClubCorp today announced the addition to its portfolio of Cherry Valley Country Club, a premier private country club located in Skillman, New Jersey – within four miles of historic Princeton – that serves as the pre-eminent family club in the area. A multimillion-dollar capital improvement project is currently being planned that will include renovations and upgrades to the dining room, terrace, private event space, and pool and fitness areas.

Well known for its undulating greens, contoured fairways and meticulous grounds, the 18-hole Rees Jones-designed championship golf course – playing more than 7,000 yards from the championship Rees’ Tees – is challenging yet fair for golfers of all skill levels. The course winds through the gently sloping meadows and woodlands of the property alongside Bedens Brook.

A centerpiece of Cherry Valley Country Club is the Aquatics Facility featuring two pools – a magnificent Olympic-sized pool and a separate walk-in kiddie pool – surrounded by both sunshine and shaded deck seating, and a poolside cabana offering a range of fare from snacks to steaks.

The Woodacres clubhouse features a casual grill and bar and a more formal dining room that opens to a covered terrace overlooking the golf course. CherryValley Country Club also offers one of the finest tennis facilities in the area, with lighted Har-Tru tennis courts, a stadium court, and extensive tennis programs for players of every level. The FitnessCenter offers a unique combination of state-of-the-art equipment and the services of performance coaches by the Source Institute for Human Performance – a strength, conditioning, and speed-development company. Additional amenities include a boardroom that can be reserved for private meetings and Bocce ball courts.

“We are very excited about the addition of Cherry Valley Country Club, which is known for both its outstanding golf and reputation as the foremost family club in the area,” said Mark Burnett, ClubCorp executive vice president, golf and country club division. “The club – our first in New Jersey – will serve as a great complement to ClubCorp’s portfolio of clubs, especially in the Northeast where it is our fourth new golf property in just over two years.”

“The members are very excited to be a part of the ClubCorp family,” said Thomas Amato, the club’s treasurer, who also acted as interim general manager.

“We all look forward to the company’s vision for the future of the club and to taking advantage of the many benefits that ClubCorp brings,” added Hugh Hurley, president of the club’s Board of Trustees.

As a member of the ClubCorp family, members will enjoy comprehensive Club, Community and Worldwide benefits including complimentary green fees and complimentary dining at more than 200 private clubs and access to more than 700 hotels, resorts and entertainment venues. In addition, members also receive access to local clubs, including Nassau Club, Princeton Club, Pyramid Club and Hartefeld National in Avondale, Pennsylvania.

Since its founding in 1957, ClubCorp has operated with the central purpose of Building Relationships and Enriching the Lives® of its members. ClubCorp owns or operates a network of more than 150 golf and country clubs, business clubs, sports clubs, and alumni clubs in 25 states, the District of Columbia and two foreign countries that serve over 350,000 members, with approximately 14,000 peak-season employees.