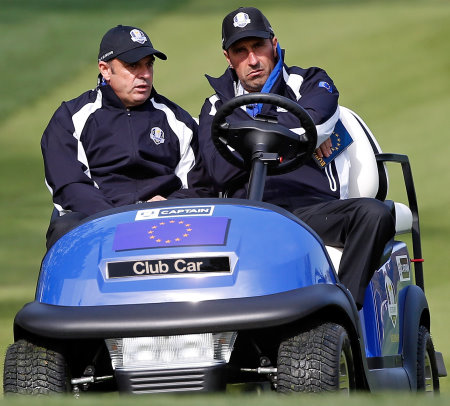 Members of the Club Car team were present at Medinah, where more than 750 Club Car vehicles were on site to provide transport and logistics for the event, and witnessed at first hand the unprecedented proceedings.

Club Car Director of Golf Business for Europe, the Middle East, India and Africa, Kevin Hart, said: “The atmosphere was incredible – I’ve never experienced anything like that in my life. The quality of the golf, and the support from fans, was sensational.

“To see José María Olazábal driving around on his Captain’s Car on the final day made us all feel extremely proud. It is an honour to have played a part in what will be remembered as one of the greatest sporting events of all time.”

While Club Car’s golf cars enabled both sides’ captains, vice-captains, team and match officials to move swiftly around the course, hundreds of the company’s utility vehicles were deployed around the venue to support television and event logistics.

Club Car is the world’s largest manufacturer of small-wheel, zero-emissions electric vehicles, and has already been appointed to supply a fleet of golf and utility vehicles for The 2014 Ryder Cup at Gleneagles.

“Club Car’s association with the European Tour and The Ryder Cup extends back to 1999, and we are extremely proud of this relationship,” continued Kevin Hart. “The Ryder Cup is one of the top three most viewed sporting events in the world and, while we are all enjoying this moment, preparations are already underway for Gleneagles 2014.”