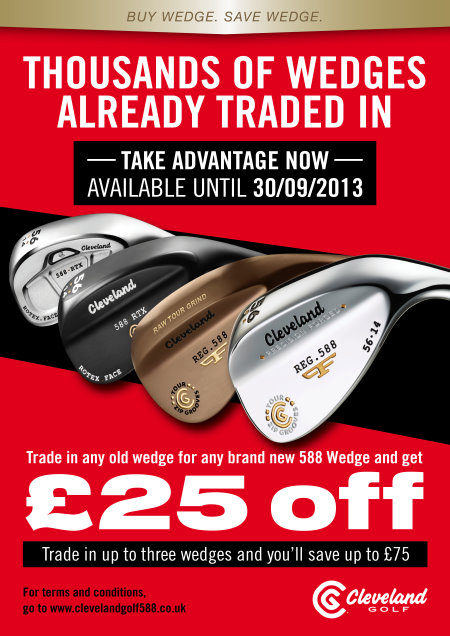 Cleveland Golf announcesa the extension of its wedge trade-in promotion, following unprecedented levels of success for the promotion since its launch in March 2013.

The promotion, which allows golfers to trade in any wedge and receive £25 off a new Cleveland 588 RTX wedge or 588 Forged wedge, will now extend from July 1st until September 30th 2013 in the UK, having originally had a cut off of 30th June.

Since launch, the success of the promotion has driven the brand forward to such a level that at the end of May, Cleveland wedges were the Number One wedge brand in the UK Market*. (*Source Golf Datatech Monthly Retail Audit – May 2013)

With thousands of wedges already traded in by golfers from around the UK, Cleveland Golf is taking the decision to extend the promotion to allow as many golfers as possible to trade up to the new face of spin.

The promotion will carry the same terms as it did at launch in March, with golfers able to trade in as many as three wedges at any one time regardless of the make, model or age of the wedge they trade in.

The Cleveland Golf 588 RTX wedge line-up is revolutionizing the market thanks to 16% larger grooves and new Rotex Face technology. The Rotex Face is a directionally optimized form of laser milling and is designed to help golfers achieve maximum control over their golf ball from any lie.

Details of the Cleveland Golf Wedge Trade-In Promotion are available at http://www.clevelandgolf588.co.uk