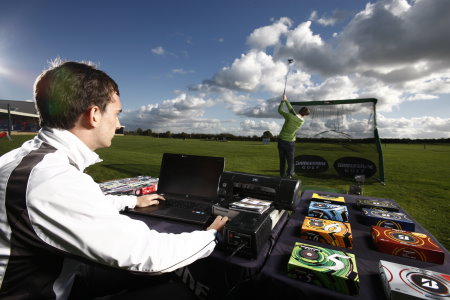 Bridgestone Golf UK has announced its most successful ball-fitting year to date after an event at 11-time Open Championship venue Royal Lytham & St Annes took the number of golfers completing the Bridgestone Ball Fitting Challenge to more than 3,600 in 2013.

As Bridgestone Golf moves towards 240,000 completed live launch monitor ball fittings worldwide, the members’ day at Lytham ensured the brand had fitted 3,620 golfers in the UK & Ireland during the calendar year. The world-renowned Lancashire venue became the 260th British or Irish golf club to have hosted the Bridgestone Ball Fitting Challenge in 2013, joining other former Open Championship courses such as Carnoustie, Royal Troon and Prince’s.

“It’s no real surprise that Bridgestone’s ball fittings have been even more popular this year because golfers are always looking for an advantage and by selecting the right ball for their game, they can have that advantage,” said Royal Lytham & St Annes’ Head Professional, Ben Squires, who has seen Bridgestone become his best-selling ball brand in the two years since the links club first welcomed a ball-fitting day.

“By speaking to the ball technicians and watching fitting sessions, my staff have also been able to learn more about the construction of the golf ball and how specific models can help our members improve,” added Squires. “My advice to fellow PGA Professionals would be to listen to a Bridgestone technician and invest the time to learn more about ball fitting, because the proof is in the pudding – golfers are coming back to buy the Bridgestone ball.”

The Bridgestone Ball Fitting Challenge – staged to demonstrate to golfers which ball is best suited to their swing speed – has produced an average distance increase of more than 10 yards per UK & Ireland golfer fitted during this year.

“Our ball fitting technicians have never been in greater demand because more and more golf clubs are seeing at first hand how the sessions can generate extra ball sales for their business,” said Steve Kettlewell, MD for Bridgestone Golf UK. “We’ll be adding a third ball fitter to our team for next year as we set up even more fitting sessions at golf clubs across the UK and Ireland.”

More than 75% of British and Irish golfers fitted by Bridgestone this year were proven to have a swing speed of less than 105 mph, yet over half of those players were previously using a ball that was designed expressly for the faster swing speeds of elite golfers. Bridgestone has seen a significant number of golfers convert to its Tour-feelB330-RX and B300-RXS ball models, which feature a soft core that enables golfers with swing speeds under 105 mph to fully compress the ball and improve distance and dispersion.

The ball that was prescribed the most across the UK and Ireland was Bridgestone’s e6, which accounted for around 49% of golfers fitted. The best-selling e6 is designed with a soft surlyn cover and low compression core to improve feel, but also with an anti-side spin inner layer to produce longer and straighter ball flights.