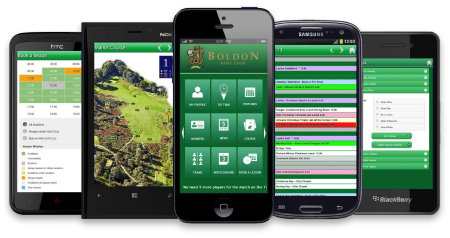 Boldon GC in Tyne and Wear is delighted with the way its new Eagle club members app is enhancing perceptions of the club.

Nearly 30% of the membership have already downloaded the Eagle app within 15 days of going live, proof for Secretary/Manager Chris Brown that the app is the ideal communications tool for members, as he explains, “Members really enjoy being able to keep in touch with what’s going on at their club. The app means we can communicate with them wherever they are, because people carry their smartphones and iPads wherever they go.”

Chris continues, “The app is perfect for the kind of faster moving and updateable information members need like fixtures and diary, events and messages and is more obviously member orientated than social media. It sits perfectly alongside both our social media feeds, and the club website which is ideal for visitors and society organisers who perhaps know less about the club and want to see images of the course, green fees and society packages. The app simply provides greater immediacy.’’

Members of all ages are downloading the app, from juniors aged 8 to the club’s oldest playing member who’s 88 and armed with an iPad, underlining the web-based app’s ability to work on mobile and fixed platforms and maximise the Eagle app’s reach.

Chris is highly aware of the need for golf clubs to be seen as forward-looking and inclusive, something the Eagle app is helping Boldon GC achieve as he explains, “I’m excited by the step we’ve made, because the app’s a real leap forward in terms of the club not only looking but being increasingly professional. It’s not just something our members are picking up on, our main app sponsor has really appreciated the way in which Boldon GC is moving forward.”

Chris explains, “Fairstone Financial Management, sponsor of golf’s amateur Home Internationals, thinks the app is much more dynamic and professional than traditional static advertising. They rate the quality of the graphics and the way the dropdown works whenever someone taps on the app.”

The Eagle app is making life easier for Chris as well, as he comments, “I can update any tab with just two taps on my smartphone. The Fixtures diary and the Noticeboard tabs are proving ideal for telling members what’s happening at the club, or about forthcoming events, work on the course etc. So instead of them calling or coming to the office and asking me what’s going on, they’re checking their app and letting me crack on with my workload, as one of our older members readily admitted the other day!”

Other clubs in the region are showing a lot of interest as well. “I play at another club and when I’m briefly working on, checking or show other members our club’s app, their reaction is overwhelmingly positive. It won’t be long before other clubs take advantage of the app, a tool which provides such an easy communication method in such a contemporary way.”