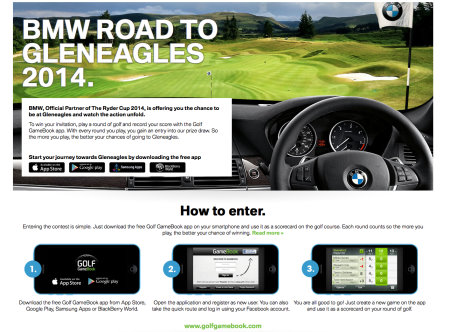 Leading premium car manufacturer BMW, Official Partner of The Ryder Cup 2014, has launched the ‘Road to Gleneagles 2014’ – a free-to-enter competition open to UK golfers playing wherever and whenever until 8th June.

Powered by social live scoring platform Golf GameBook, the competition gives all UK golfers an opportunity to win a VIP trip to Gleneagles in Scotland to experience the 40th playing of The Ryder Cup.

The main prize includes VIP hospitality for the final round of The Ryder Cup, plus dinner and overnight accommodation at Cameron House, situated on the banks of Loch Lomond.

Peter Walker, Sports Marketing Manager at BMW UK Limited said: “As a proud sponsor of The Ryder Cup 2014, BMW are delighted to be giving golfers up and down the UK the chance to win lots of great golf prizes, including a VIP trip to watch the 2014 Ryder Cup at Gleneagles.

“BMW have supported amateur and professional golf for the last 28 years and we see the Road to Gleneagles 2014 as a natural extension to this, using the Golf GameBook app to connect keen golfers of all levels with the greatest team golf event in the world.”

To participate, golfers simply download the free Golf GameBook app on their smartphone and use it as a scorecard on the golf course. Golf consumers can start their journey to Gleneagles by downloading the app from the App Store, Google Play, Samsung Apps or Blackberry World.

1. The Main Contest: All rounds count

The 11-week Main Contest offers UK golfers a chance to win the VIP experience for the final round of this year’s Ryder Cup. All rounds played with GameBook over the competition period will be automatically entered and the winner will be randomly drawn.

As an additional incentive, through the 11-week competition period, BMW will make weekly prize draws, where golfers can win one of five pieces of BMW golf merchandise per week ranging from BMW Golfsport polo shirts, jackets and bags, tickets to this year’s BMW PGA Championship at Wentworth, through to one-week’s free use of a new BMW car.

At the end of each week, during the 11-week competition period, a winner will be drawn from every competitor who scores 30 points or more that week using the Stableford scoring system. The winners (11 people in total) will win a playing place at the BMW Road to Gleneagles 2014 Playoff tournament at The Belfry for themselves and a friend.

Weekly side-contest winners are also eligible for Titleist and FootJoy prizes which will either be a year’s supply (six dozen) of Titleist ProV1 Golf Balls, plus two Titleist caps or two pairs of FootJoy golf shoes and 12 golf gloves.

The BMW Road to Gleneagles 2014 Playoff event takes place on Thursday, August 14th at The Belfry, where the tournament winners will receive a pair of entry tickets for one day during The Ryder Cup, September 23rd -28th, 2014.

The club that hosts the most rounds played using Golf GameBook will win a VIP experience for two at The Belfry Playoff.

The top three players posting the best Golf GameBook scores at the most active golf club on a bi-weekly basis, will also win great prizes, courtesy of Titleist:

Mikko Rantanen, Chief Executive Officer, GameBook Inc, said: “By just playing golf and registering a score via the Golf GameBook app, all UK golfers are giving themselves an opportunity of being at The Ryder Cup, one of the world’s great sporting occasions.

“What’s more, each round played with GameBook gives one entry to the prize draw, so the more a golfer plays, the better the chance of winning. There are no limitations to how many rounds each golfer is allowed to play during the contest period, so the incentive to play as much as possible couldn’t be greater.”

An in-app chat-style commenting option, similar to Facebook, allows users to interact with friends while they stroll the fairways.

BMW and The Ryder Cup: www.bmw-golfsport.com