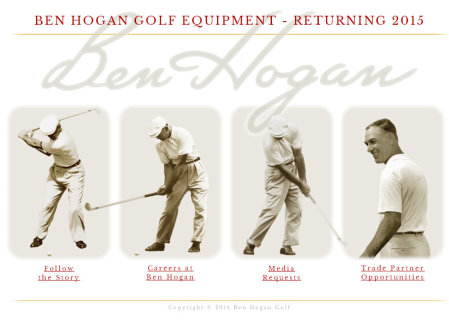 Oscar Feldenkreis, president of Perry Ellis International and Terry Koehler, president of Eidolon Brands, LLC have announced that after a seven year absence from the golf equipment marketplace, the Ben Hogan Company will return to the business of club-making in 2015.

“Since our purchase of the Ben Hogan brands in 2012, we have been contacted by many parties inquiring about the return of this revered brand to the equipment business”, explained Feldemkreis. “After much deliberation, we are excited to have Eidolon Brands reintroduce the Ben Hogan brand back into the golf equipment sector.”

“Respecting the history and the legacy that Ben Hogan built with the golfing public, we were determined to find just the right group to drive that effort,” added Feldenkreis. “As we became more acquainted with Terry Koehler and EIDOLON Brands, it became clear that this company exhibits the values, spirit and passion that Ben Hogan always represented to the golf community. With EIDOLON’s core management team having over 150 years of Ben Hogan Company experience in manufacturing, sales, product development and marketing, there is no question they understand and embrace Mr. Hogan’s values and are the ideal team to bring the Ben Hogan name back to its historic leadership position in the equipment industry.”

Terry Koehler, President/CEO of EIDOLON Brands, LLC is a lifelong Ben Hogan devotee and former Director of Marketing of the Ben Hogan Company. He is also the architect of the SCOR4161 product line, which has garnered numerous media awards and consumer accolades for challenging the design and performance of conventional wedges and set-match short irons.

For Koehler, creating the ‘new’ Ben Hogan Company represents an opportunity to honor the legacy of two of his heroes – his father and Mr. Hogan. “My golf life began with an introduction to Mr. Hogan’s values and principles from my father,” Koehler reminisced. “He played with Mr. Hogan before the war and considered him a true hero, so I did, too. I grew up with “Power Golf” and “Five Lessons” as my golf textbooks, and always played Hogan irons from my very first cut-down 5- and 9-iron. To be in a position to assemble and lead a team of equally committed Hogan disciples is an honor I could not even have imagined.”

According to Koehler, an R&D team has already been working on the new Ben Hogan club designs, and the first offerings are targeted for introduction in 2015.

“We are studying all the things Mr. Hogan believed about golf clubs, and dissecting early Ben Hogan designs to understand his performance principles and knowledge of what a golf club should do,” explained Koehler. “There was a wealth of genius in those early clubs. Our commitment to the Ben Hogan legacy is to ensure that every product delivers unmatched precision and dedication to the art of shotmaking, providing equipment that allows golfers of all abilities the opportunity to optimize their skills.”

The Ben Hogan Company was founded in late 1953, following Mr. Hogan’s unprecedented season in which he won golf’s Triple Crown. The Company’s first set of irons, named “Precision”, was introduced in 1954. For over forty years, Ben Hogan irons were instrumental in hundreds of victories on all the professional tours and were favored by thousands of club professionals and top amateur golfers. The Company was moved from Fort Worth in the early 1990s, only to return for a short time a few years later. No golf clubs bearing the Ben Hogan brand have been introduced to market during the past seven years.

Koehler emphasized that the “new” Ben Hogan Golf Equipment Company would be based in Fort Worth, rather than at EIDOLON Brands’ headquarters further south in Victoria, Texas.

“Ben Hogan and his golf company were, and always should be, Fort Worth treasures,” explained Koehler. “We even recently moved our SCOR4161 production facility to Fort Worth in anticipation of returning the Ben Hogan Company to its rightful and historic place in the top tier of golf equipment brands.”