American Golf is returning to its roots with the opening of a state of the art golf facility in its hometown of Warrington.  The company has invested over £250,000 in the Warrington facility, fitting it out to the highest specification so it stands out as the flagship among its 121 stores across the UK and Ireland.

After the opening ceremony, Barry Leach reflected on the return to the company’s roots, “Warrington is our home town, so we are really proud to be able to open a store here that showcases the very best products, technology and services available on the golf market today. This is a homecoming for us and we can’t wait to show people how far we have come since the business opened its doors nearly 40 years ago.”

Founded by brothers Howard and Robert Bilton, the first American Golf was store opened in Warrington in 1981. Having been given an insight into the latest Warrington incarnation, Robert Bilton was clearly proud of the legacy that his and Howard’s efforts had left when he said, “When we started American Golf all those years ago we never imagined that it would grow to be the size or shape that it is now. The Warrington store is so much more than just a shop. Golfers can go there to have lessons, practice their game and meet other people who love to play golf. We’re really proud to see how far it has come and of the part we played in putting Warrington on the map.” 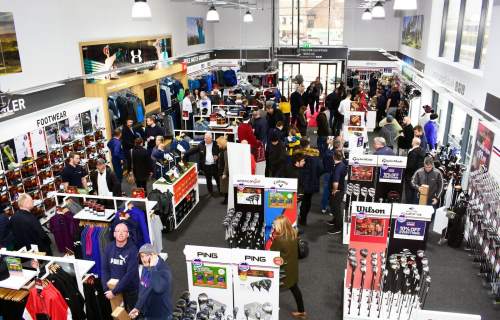 The Warrington store, based on the Knutsford Road in Latchford, boasts a mezzanine game improvement zone that houses the latest club fitting technology. With the widest in-store range of clubs, expert guidance from PGA Pro’s and access to the latest club fitting technology, the new site is the perfect place for golfers of all abilities who want to improve their game, try out new equipment or just stop in to talk golf.

Deputy Mayor Cllr Karen Mundry and her consort – son Jason Mundry – tried out the new facilities under the expert guidance of an American Golf fitter. Councillor Mundry was hugely impressed with the facility and the company’s commitment to the local area, including eight new members of staff, commenting, “I welcome American Golf’s investment into Warrington. The facilities are really high-tech, everyone should come and have a go!”

The Warrington store is American Golf’s 14th and final store opening for 2017. With equally ambitious expansion plans for 2018, the Warrington store will stand as a model for future openings and provides a facility fitting for the company’s home town.