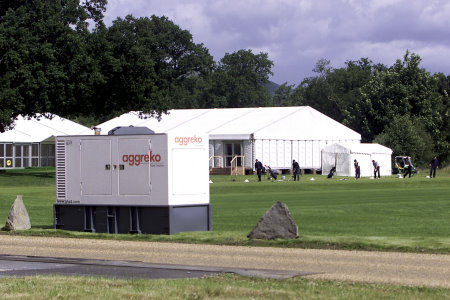 Over the course of the last year, Aggreko designed a power and cooling solution that would allow golf fans from around the world to enjoy the international event in safety and comfort, without detracting from the beauty of the surroundings.

The specialized equipment used at the event was built specifically for golf tournaments and large-scale spectator events such as the Ryder Cup. It includes quiet, uninterruptible TwinPack generators – which provide cleaner, quieter and more convenient temporary power than other commonly used generator sets – and custom-built tent air conditioners.

Powering an event of this magnitude requires tons of Aggreko equipment and manpower, including:

“Aggreko is proud to be the exclusive supplier of temporary power and cooling systems for The PGA of America,” said Gary Meador, Head of Event Services, Aggreko North America. “The Ryder Cup is the largest job The PGA manages in the US, and it depends on Aggreko to provide essential services without detracting from the attractive appearance of the many temporary structures throughout the venue.”

Aggreko has a long history of providing power to high-profile events, not only previous Ryder Cups, but also several national sporting events, and the 2012 London Olympic Games.