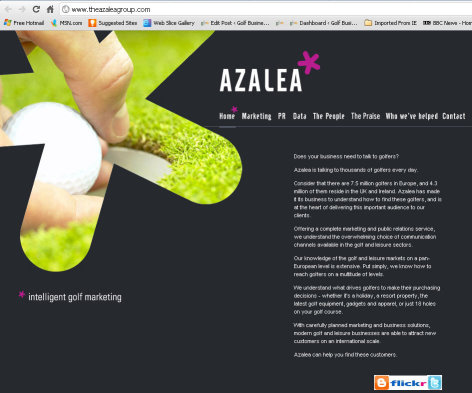 The Azalea Group’s influence in the golf industry continues to spread after it was appointed to handle Tourism Ireland’s golf PR in the UK.

The Hampshire-based company will start work with immediate effect with responsibility for promoting all aspects of Tourism Ireland’s Time to Play initiative to a widerUKaudience over the coming months.

With two of the four reigning Major champions, golf on the Emerald Isle is thriving while a stellar line-up, including new world number one Rory McIlroy, is set to head to Royal Portrush for the Irish Open in June.

David Boyce, deputy director of Tourism Ireland Great Britain, said: “With the likes of Rory McIlroy, Darren Clarke and Graeme McDowell, Irish golf has never been so popular and it’s important that we maximise coverage to its full potential.

“We have been aware of Azalea’s growing presence in the market place for some time and were very impressed with their range of innovative ideas to promote our Time to Play brand.

“It’s a very exciting time for Irish golf and we’re delighted to have formed this new partnership.”

Azalea managing director, Sean Noble, added: “Ireland has some of the most recognisable golf courses in the world and it will be a pleasure to bring these to the consciousness of the UK golfing public.

“Our strong background in golf tourism and in delivering innovative and comprehensive PR strategies is something we are very proud of and we look forward to working with David and his team and to demonstrating measurable return.”

With a host of long-standing, high-profile clients, the addition of Tourism Ireland to its client list is further reward for Azalea’s commitment to excellence in the golf tourism field.