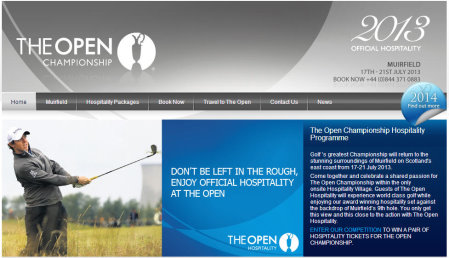 The decision to accept reservations more than eighteen months prior to the Championship is prompted by customer demand, with North West golf fans eager to secure official hospitality packages.

Announcing the move, The R&A’s Director of Marketing, Robin Bell said: “Our official hospitality programme gives our corporate customers the location they want, on course, close to the action, and they have the additional comfort of knowing that their advance purchase is secured by us and tailored to meet the highest standards of customer service.”

Two restaurants at Royal Liverpool will be housed in a new £2 million fairway-edge, double-deck pavilion and will share this prime viewing location with a complex of exclusive-use suites. Another restaurant will be sited in the busy tented village to meet the needs of smaller businesses and golf fans treating themselves to a packaged day out at golf’s oldest Major.

The Open Championship Official Hospitality Programme sales team can be contacted by telephone on +44 (0) 844 371 0883, by email at hospitality@TheOpen.com or for detailed information visit TheOpen.com/hospitality.

Titleist’s new T-Series iron family – which will be available for fittings from today (July 29) and in Titleist authorised retailers worldwide from August 26 – consist of four models – T100, T100•S, T200 and T300, each of which features new materials, processes and refinements that power exacting precision, performance and unmatched feel.