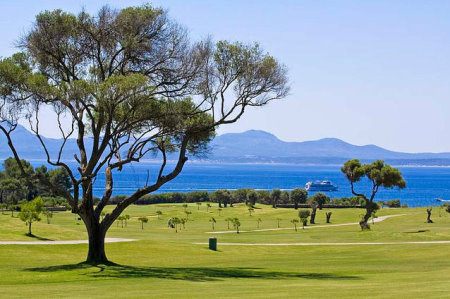 Avoid the UK’s notorious April showers this year by heading to Mallorca to take advantage of three new, four-star, golf-break packages which include Club de Golf Alcanada – voted the best on the island in a recent survey of travelling golfers.

With an average of nearly eight hours sunshine each day during April, Mallorca provides the ideal respite from the damp UK.

The four-star Aparthotel Viva Tropic, situated just 200 metres from the beach at Puerto de Alcudia, has two three-night April packages available, each offering two rounds of golf at Alcanada. A half-board deal, staying in a premium apartment costs €355pp*, or €330pp* in a studio – both based on double occupancy, and both including free TaylorMade golf club hire.

The comfortable Aparthotel Viva Tropic offers spacious rooms; three swimming pools; a spa with indoor pool, sauna, Turkish bath and Jacuzzi; as well as sports grounds and delicious food in each of its buffet, snack and à la carte restaurants.

The adult-only (minimum age 18) Vanity Hotel Golf, another four-star establishment, is offering the same three-night, two-round package for €375pp*, again, based on double occupancy and including free TaylorMade golf club hire. Its privileged beachfront location in the heart of Puerto de Alcudia offers breathtaking views over the bay. Class and comfort are the hotel’s hallmarks, from its garden area with swimming pool, sun terrace and Balinese sun loungers, to its elegant public areas, bar and restaurants. The hotel also features a gym, sauna and Jacuzzi.

The golf course also maintains the high standards set by the two hotels. Club de Golf Alcanada swept the board in the recent annual customer satisfaction survey carried out by golf holiday specialist Simply Mallorca Golf, appearing top in all three categories: overall enjoyment; overall quality; and speed of play – the first occasion one club has done so.

It was the latest in a stream of accolades for Alcanada, a stunning Robert Trent Jones Jnr-designed layout which celebrates its 10th birthday this year. It was last year voted the best golf course in Europe by German golf magazine Golf Journal – for the fourth successive year – and by the users of the top German website www.1golf.eu for the second year in a row.

Last year it also hosted the prestigious Copa de S.M. el Rey tournament – regarded as Spanish golf’s amateur championship and won by the likes of Jose Maria Olazabal, Darren Clarke and Sergio Garcia in the past.

Situated in the northern region of Mallorca, in a breathtaking location overlooking the Bay of Alcudia, Alcanada’s 18-hole championship course was opened in 2003. Adjacent to the Mediterranean, the course blends naturally into the typical Mallorcan terrain and takes its name from an island with a lighthouse which is situated just off the shore, and which can be seen from most of the holes.

Magnificent mountain and sea views and a mixture of pine and olive groves provide the splendid setting for a round at Alcanada and, despite its tender years, the course is already recognised by the golf industry as one of the finest venues in Spain and Europe and is a founder member of The Leading Golf Courses of Spain collection.

The club also boasts a centuries-old Mallorcan clubhouse which offers guests the opportunity to sample regional specialities in first-class dining facilities on its sun-baked terrace. A comprehensive golf academy, including a spacious short game area and covered driving range, is also available.

*Available only for bookings in April 2013 and subject to availability