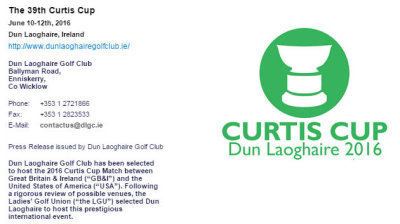 The 41st Curtis Cup match between Great Britain & Ireland and the United States will be played in 2020 at a venue selected by the Ladies’ Golf Union.

Golf clubs who would like to be considered as hosts for the prestigious three-day match in June of that year are now invited by the LGU to express a written interest by 31st March 2015. In early May 2015, those clubs who have expressed an interest will be sent a pro-forma which should be completed and returned to the LGU by 31st July 2015.

If they wish, clubs may, at this time, supply any additional documentation in support of their bid.

In August, the LGU Board will consider all the bids and draw up a short list.

A delegation from the LGU will then visit each of the short listed venues to assess the facilities and course. The chosen venue will be confirmed in February 2016 and the key officials of the chosen host club will be invited to attend the 39th Curtis Cup match at Dun Laoghaire Golf Club, Ireland in June 2016.

The formal announcement of the 2020 venue will be made after the conclusion of the 2016 match.