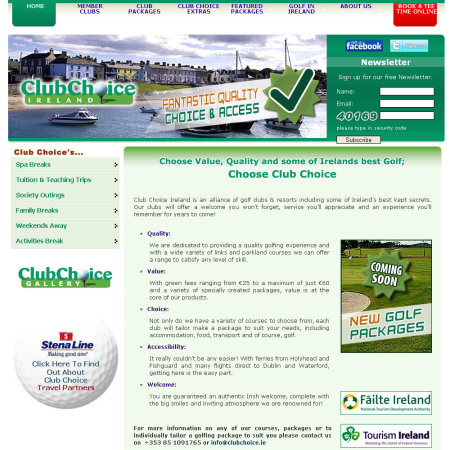 Last weekend marked the formation of a new golf marketing group which promises to roll out the red carpet to UK golfers in a bid to deliver a €2m tourism boost to the South, East and Midlands regions of Ireland.

Club Choice Ireland, which is being supported by Fáilte Ireland and Tourism Ireland, has been set up to raise awareness of the South, East and Midlands regions of Ireland as premier golfing locations among golfing enthusiasts and the business community located in the South West and Midlands of England and Wales.  The 26 trade partners and golf clubs are about to embark on an aggressive marketing campaign which will include direct visits to UK golf clubs, a series of Irish Golf Days in the UK, advertising, e-marketing, a dedicated website and media and travel trade familiarisation trips aimed at attracting 1,500 additional visitors to the regions.

Speaking at the launch of Club Choice, Ireland’s Minister for Transport, Tourism and Sport, Mr Leo Varadkar said: “I want to welcome this group marketing initiative which has great potential for promoting golfing activities in the region.  Golf is an important sector for Irish tourism, and generates more revenue than conventional holidays.  Golfing visitors tend to play at more than one location, which creates a more dispersed pattern of spending.  A clear example of the potential of golf tourism was the recent Notre Dame vs Navy American college football game, when huge numbers of visiting American fans extended their stay in Ireland with a golf break outside of the capital.  The golf sector is also a significant employer in its own right.  Club Choice Ireland is part of the effort to promote the golf tourism sector, and I wish it every success with its marketing activities in the UK.”

Tiernan Byrne, Club Choice, Ireland said that this is the first co-operative group of its kind to be set up in the regions and that they are indebted to both Fáilte Ireland and Tourism Ireland UK for their practical and financial support.

“Golfing represents one of the most valuable sectors of the tourism industry in Ireland.  Research carried out by Fáilte Ireland shows that each golfer from overseas is worth three times more to the Irish economy than the average ‘tourist’ and that they are much more likely to be repeat visitors.  It also shows that for three quarters of visitors who play golf in Ireland the opportunity to do so was very important in their decision to come here.

“As a region, it was clear that a co-operative approach to marketing and attracting golfers from overseas was the most efficient and cost-effective means of showcasing all we have to offer to a very specific target audience in the UK.  We will be focusing on quality, value and ease of access and our aim is to encourage 1,500 extra golfers to come the South, East and Midlands which, based on Fáilte Ireland’s own figures, will result in an additional €2m spend in the regions.”

Club Choice Ireland currently comprises 26 members made up of resorts, hotels and golf clubs drawn from across the golfing sector.  Also critical to the success of the group is the commitment of travel trade partner Stena Line which will be providing travel support and prizes for competitions being run in the UK.  The programme of marketing activities will begin immediately with the first of ten Irish Golf Days taking place in February 2013.  Over the course of 2013, the group will visit 120 golf clubs in the UK talking directly to golfing enthusiasts with an interest in golfing overseas.