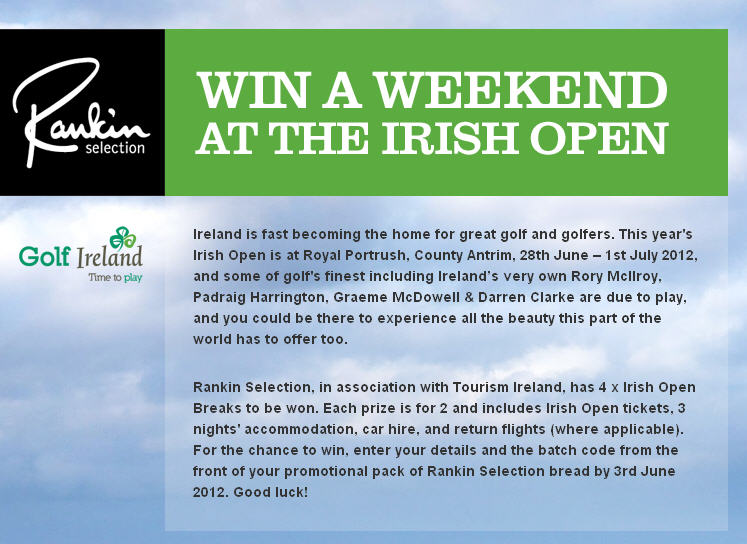 Golfers across the UK are being challenged to use their loaves and rise to the occasion for the chance to win a fantastic dream trip to next month’s Irish Open.

Tourism Ireland has teamed up with Northern Ireland celebrity TV chef Paul Rankin to offer four pairs of tickets to the tournament in a competition being promoted in packs of Rankin Selection soda breads at selected Waitrose supermarkets nationwide.

Irish Major winners Rory McIlroy, Darren Clarke, Padraig Harrington and Graeme McDowell will be among a star-studded field taking to the fairways at Royal Portrush, Co. Antrim, from 28 June to 1 July and readers could be there to see them in action first-hand.

As well as tickets to the event, the Irish Open Breaks prizes also include three nights’ accommodation, car hire and return flights where applicable – and entry couldn’t be easier.

For the chance to win, simply purchase a promotional pack of Rankin Selection breads and enter your details and unique batch code on Tourism Ireland’s website at www.discoverireland.com/rankin  All entries must be registered by 3 June.

David Boyce, Tourism Ireland’s head of business and sports tourism, said: “The eyes of the golfing world will be on Ireland this summer and we wanted to do something special to help mark the event. Ireland is famous for its golf and its traditional foods, and teaming up with Paul in this competition seemed the ideal way to link the two.”

One of the UK’s most popular culinary figures, Rankin was the first chef in Northern Ireland to win a Michelin Star, whilst his trail blazing Cayenne in Belfast is among the country’s top restaurants.

A regular on TV shows including Ready Steady Cook and Ten Mile Menu and the writer of numerous best-selling books, he is also a passionate supporter of local produce and launched The Rankin Selection – a range of traditional foods – in supermarkets throughout the UK in 2002.

Rankin, 52, added: “It’s fantastic to see the work that’s being done to promoteIrelandto an international audience, and I was delighted to be given the opportunity to help out. In Ireland, we are very passionate about golf, while food is obviously a subject that is close to my heart, and the two go hand-in-hand for anyone visiting our wonderful country.”

The promotion is part of Tourism Ireland’s ‘Time to Play’ initiative to promote golf in Ireland to a wider audience.

With some of the most famous venues anywhere in the world, Ireland offers golfers the complete package with top championship courses, stunning scenery, fascinating history and some of the best craic around.

For full details about the Irish Open Breaks competition, go to www.discoverireland.com/rankin