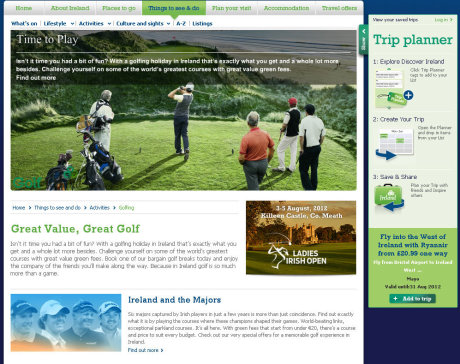 Golfers in south-east England now have even easier access to some of the world’s finest courses – and what’s more they can take their golf clubs for free.

British Airways has re-launched its services from London Heathrow to Belfast City and Dublin airports with flights operating up to seven times a day, seven days a week, making courses like Royal Portrush, Royal County Down, The European Club and Royal Dublin more accessible to UK golfers.

The routes replace the BMI services which ended earlier this summer and British Airways’ policy of not charging for a first item of hold baggage under 23 kg means golfers will be quids in before they arrive on the first tee.

David Boyce, TourismIreland’s head of business and sports tourism, said: “With UK consumers looking for quality and value from their golf break, the new BA routes are sure to add further encouragement to golfers to visit Ireland to sample our world-class courses.”

Ireland’s reputation as a leading global golfing destination was further endorsed by a US Golf Digest poll earlier this summer, which ranked eight of its courses inside the top 100 in the world outside America.

Furthermore, the UK’s Golf World magazine featured nine Irish courses within its “World top 100 courses you can play”. And Royal County Down obviously impressed golfers on both sides of the Atlantic as it took the number one position in both polls.

June’s Irish Open at Royal Portrush Golf Club attracted record crowds of more than 120,000 and highlighted what Ireland has to offer as a world-class golf destination.

With some of the most famous venues anywhere in the world, Ireland offers golfers the complete package with top championship courses, stunning scenery, fascinating history and some of the best craic around.

Further details about visiting Irelandcan be found by logging on to www.discoverireland.com/golf