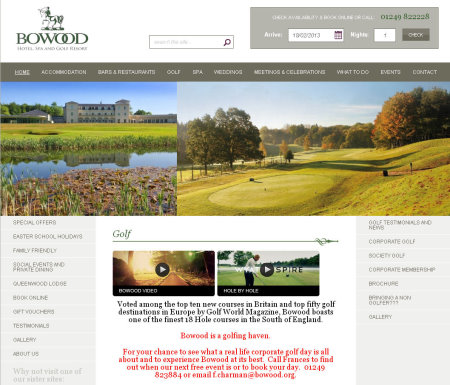 Securing Gold in the ‘Business Tourism’ category and Bronze as ‘Large Hotel of the Year’, Bowood Hotel, Spa & Golf Resort near Calne, Wiltshire. was one of just two Wiltshire winners – and four ‘double’ triumphs – at the South West Tourism Excellence Awards 2012/13 held on 8 February 2013 at Cornwall’s Eden Project.

The 2012/13 Awards winners were drawn from as far west as Scilly and east as Wiltshire, south as Devon & Cornwall and as far north as the Cotswolds, being judged across best hotel, event, attraction, activity, holiday park and self catering holidays categories as well as for customer service, access, sustainable tourism and business tourism.

Amongst the winners were Business Development Manager, Frances Charman and Head of Sales & Marketing, Hayley Potter who collected the pair of awards on behalf of Bowood.

This is the second consecutive year that the 43-bedroom Bowood Hotel, Spa & Golf Resort gained Bronze in the ‘Large Hotel of Year’ category which was open to ‘Hotels, Town House Hotels, Country House Hotels and Metro Hotels with over 35 bedrooms and a current quality assessment from a recognised independent body’.

The 2012/2013 Awards are the first time, though, that Bowood was named a winner in the ‘Business Tourism Award’ category. Out of those judged as “..quality tourism businesses that are aimed at the corporate sector or weddings market, for example event and exhibition venues, convention hotels, conference and banqueting venues’’ it was Bowood Hotel, Spa & Golf Resort that gained Gold.

The South West Tourism Excellence Awards are the official tourism awards for the region. They also form the regional heat of the national VisitEngland awards to which Bowood Hotel, Spa & Golf Resort will now progress, flying the flag once more for Wiltshire.

Bowood Hotel, Spa & Golf Resort was officially opened by HRH The Duchess of Cornwall in May 2009. Located in the western corner of Capability Brown’s 2,000 acre Grade I Listed Great Park, Bowood Hotel adopts a distinctively English country house tone yet with contemporary twists. Its ‘country-chic’ interiors, designed by Lady Lansdowne, bring modern translations to classic pieces while also drawing upon Bowood’s impressive heritage, reflecting themes found within Bowood House (home to the Lansdowne family since 1754) and across the estate.

The Chair of Judges, Alistair Handyside, commented: “Once again, leading tourism businesses in the South West have excelled themselves in maintaining a strong tradition of innovation and quality.”

“It was a tremendous honour to gain Bronze in the ‘Large Hotel of the Year’ category last year,” comments Bowood’s owner, Lord Lansdowne. “To repeat this a year later and also gain the Gold for ‘Business Tourism’ certainly highlights Bowood Hotel, Spa and Golf Resort’s consistency of performance and on-going endeavours to build upon success. At the same time, the Gold and Bronze wins at this year’s South West Tourism Awards also reveal Bowood’s appeal for the leisure guest and the corporate client equally.

“My greatest of thanks and congratulations go out to General Manager, Charles Morgan and every member of the team at Bowood Hotel, Spa & Golf Resort whose tireless hard work and professionalism have led to these proud achievements,” adds Lord Lansdowne. “It’s certainly a wonderful and promising start to 2013!”