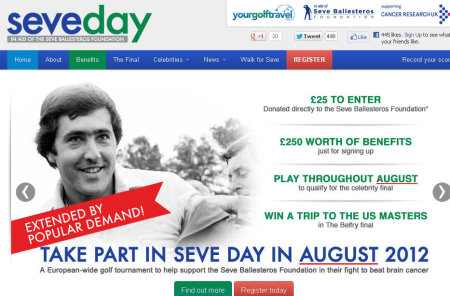 Your Golf Travel has been so overwhelmed by the support that it has received for ‘Seve Day’ since its launch that it has decided to extend the new event in honour of the late Seve Ballesteros for another month.

Sports stars and celebrities have clamoured to give their support to the pan-European tournament set up in May in conjunction with the Seve Ballesteros Foundation and Cancer Research UK.

Your Golf Travel initially planned for ‘Seve Day’ to take place throughout the month of July only but has now extended the competition for another month due to the fantastic response it has received.

Despite poor weather during July, more than 1,000 people signed up to the event while Your Golf Travel’s recent 300-mile ‘Walk for Seve’ charity trek from London to The Open Championship, which raised more than £20,000 for cancer, further increased awareness for the tournament.

And the event has been boosted further with the news that this year’s grand final will be covered by VPAR, whose state-of-the-art scoring system will offer competitors live up-to-date leaderboards,  just like the professionals experience every week.

Your Golf Travel co-founder Ross Marshall said: “The support Seve Day has received so far has been phenomenal, and all the more so when you consider how bad the weather has been this summer.

“The event has really captured the imagination of people. Seve was a hero to millions and we feel it is only right to give more golfers the chance to take part.”

Set up in partnership with the Seve Ballesteros Foundation and Cancer Research UK, Seve Day is aiming to attract thousands of participants and raise significant funds to help vital research into brain cancer.

Launched at the start of July, to celebrate the month when Ballesteros won his first Major title at The Open in 1979, competitors can play a round of golf anywhere in Europeand and register their scores on the www.seveday.com website.

A star-studded grand final will then be held at The Belfry in October 2012, shortly after this year’s Ryder Cup in Medinah, where the top 72 Stableford score entrants will play for big prizes and the Seve Day 2012 Trophy, using VPAR’s live scoring service.

VPAR sales director, Jeremy Gray, said: “This is a great opportunity for us to support the Seve Ballesteros Foundation whilst giving players the excitement of live leaderboards in their quest to handle the pressure and go on to win the grand final.”

In return for a £25 / €30 entry fee, which goes directly to the Seve Ballesteros Foundation, participants also receive £250 worth of vouchers, golf lessons, free balls and complimentary rounds of golf, plus a chance to win an exclusive prize to The Masters 2013 if they win the Grand Final.