World Cup of Golf returns to Melbourne, Australia, in 2013 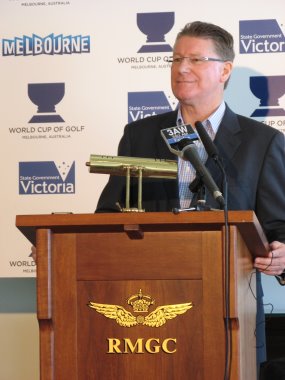 The International Federation of PGA Tours, an organization of the top professional golf tours in the world that sanctions the World Golf Championships and the World Cup of Golf, along with the State of Victoria and the International Golf Association has announced that the 2013 World Cup of Golf will return to The Royal Melbourne Golf Club in Melbourne, Victoria, Australia, and will be played 21-24 November.

The Royal Melbourne Golf Club, which hosted The Presidents Cup 2011, will host back-to-back events in November. The World Cup will be preceded on the calendar by the Australian Masters, which boasts Adam Scott as the defending champion.

The World Cup has been played three previous times in Australia, each at The Royal Melbourne Golf Club. The event was last played in Australia in 1988 as part of the nation’s bicentennial celebrations when the U.S. team of Ben Crenshaw and Mark McCumber defeated the Japanese team of Masashi (Jumbo) and Tateo Ozaki to win the tournament.

“It is an honour to host the World Cup and welcome another international golf event to Melbourne, home of great sporting events and, of course, the incredible Sandbelt region,” said Victorian Premier Dr. Denis Napthine. “Melbourne is the pride of Australia when it comes to major events, and we would argue rivals any city in the world in that regard.  Today’s announcement is another exciting chapter for Melbourne, and we eagerly anticipate the World Cup in November, when we can once again showcase all that Victoria has to offer to the event’s players and fans.”

As part of the move, the event boasts an $8 million total purse and returns to an individual, stroke-play competition for $7 million, with a team component (adding the total scores of two-man teams) for $1 million.

The qualification system for the event is similar to that which will be used in the Olympic Games, when golf returns to the program in 2016. The field will include 60 players (no cut), with eligibility taken from the Official World Golf Ranking. Up to four players can qualify, per country, if they are in the top 15 of the OWGR. Beyond No. 15, up to a maximum of two players per country can qualify.

If two or more players from a country qualify, then the country is eligible for team competition, with the top-two players comprising the qualified team.

The major difference between the World Cup qualification model and that of the Olympic golf competition is that England, Scotland, Wales and Northern Ireland will each be considered a separate country (for the purpose of the Olympics, those four countries compete as Great Britain). Further, the Olympic Games golf competition will not feature a team component.

OWGR points will be awarded for the individual portion of the competition.

“We’re thrilled that the World Cup will return to Australia, bringing this historic event to a venue, city and country that have hosted the biggest and best international sporting events for many years,” said PGA TOUR Commissioner Tim Finchem on behalf of the International Federation of PGA Tours.

“The Presidents Cup 2011 was the best in event history, thanks in no small part to the welcome provided to us by the incredible Australian sports fans, the Victorian government and the Victorian Major Events Company. With all of those ingredients still in place, and added to them Adam Scott’s win at the Masters Tournament in April, there is tremendous momentum and excitement for the World Cup 2013.”

“Melbourne, Australia, is a perfect venue for the World Cup,” said Jon Linen, chairman of the International Golf Association. “We look forward to a terrific competition this November and are confident that the many sports fans in Melbourne will turn out to cheer on the Australian team and the players from many other countries who will be participating in the event.”

“This is a great day for golf and a great day for Australia,” said Chief Executive Officer of PGA of Australia Brian Thorburn. “The addition of the World Cup will complement an already strong swing of tournaments including the Australian PGA, Open and Masters and will significantly boost the international player prospects for these events.”

IMG, which is staging the Australian Masters in the week preceding at Royal Melbourne, will also manage the delivery of the World Cup.

Global Head of Golf at IMG Guy Kinnings said, “Australian golf is fortunate to have such outstanding support from the Victorian Government and we are delighted to have the opportunity to partner the 2013 World Cup immediately following the Australian Masters, which we are proud to stage at The Royal Melbourne Golf Club for the first time.”

The tournament was founded by the International Golf Association in association with industrialist John Jay Hopkins for the purpose of promoting international goodwill through golf. It began in 1953 as the Canada Cup and was renamed World Cup in 1967.

The World Cup was staged as part of the World Golf Championships series from 2000 to 2006. In 2010, it was announced that the event would change from annual to biennial, held in odd-numbered years, to accommodate the 2016 inclusion of golf in the Olympics Games.