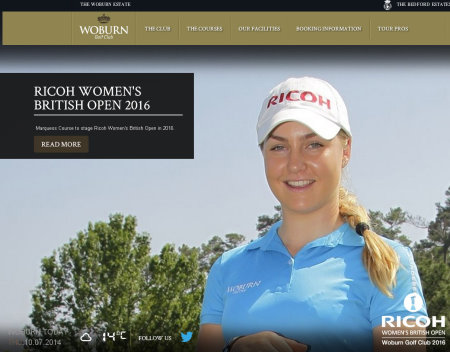 Woburn has hosted the Championship on nine occasions and the return is much anticipated by players and club members alike. While previous Championships have been held on the Duke’s Course, it will be the Marquess Course that will host the 2016 Championship. This marks not only the 40th edition of the Championship, but also the 40th anniversary of the opening of Woburn Golf Club.

Forming part of the Woburn Estate, home to the Duke of Bedford, Woburn Golf Club is one of the UK’s premier golf facilities, boasting three world class Championship golf courses. The Marquess Course is the most recent of the three courses, opening in 2000, and it has hosted two European Tour events, but never a women’s Major.

Woburn Golf Club member and Europe’s Number One, Charley Hull said, “This is amazing news and I am looking forward to the 2016 Championship at Woburn already. I love playing in the UK and really enjoy all the support from the home fans but to be able to play a Major at my home club in front of all my family and friends will be incredibly special.  The Marquess Course is a great test of golf and I know how excited all the members will be to have the Championship return. I can’t wait for 2016 to come around.”

Ian Poulter, also affiliated with Woburn added, “This is fantastic for Woburn and I know how much all the members will enjoy getting behind the Ricoh Women’s British Open. The Marquess Course is a great test and will provide a wonderful stage for the world’s best women golfers.”

The Duke of Bedford commented, “We are delighted to be welcoming the Ricoh Women’s British Open back to Woburn in 2016. It is a real honour for the Club to host this Major Championship again and we look forward to the ladies showing us just how the Marquess should be played.”

Shona Malcolm, the LGU’s CEO commented, “We are all looking forward to returning to Woburn for the 10th time. With so much shared history, Woburn is a very fitting venue at which to celebrate the Championship’s  40th anniversary. The Marquess Course will provide a fresh challenge for the players and fits perfectly with our commitment to ensuring the world’s best women players showcase their talents on the world’s best golf courses.”

Simon Sasaki, Corporate Executive Vice President, Ricoh Company Ltd. concluded, “We have been the title sponsor of the Ricoh Women’s British Open since 2007 and one of the many attractions of this historic tournament is taking our clients to the many wonderful venues that the LGU and IMG have secured. We think Woburn will be the perfect place to celebrate the events 40th anniversary with all its heritage and its proximity to London.”

The Ricoh Women’s British Open was founded by the LGU in 1976 and is staged in conjunction with IMG, the world’s largest sports marketing company, since 1984. The event has been co-sanctioned by the LPGA and LET since 1994 and gained Major status in 2001.

Ricoh is a global technology company specialising in office imaging equipment, production print solutions, document management systems and IT services, which has been the title sponsor of the Ricoh Women’s British Open since 2007.