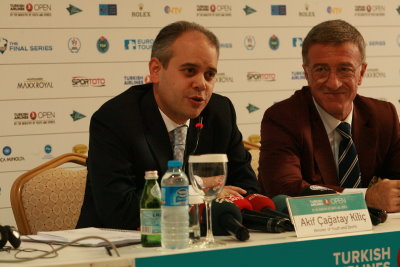 Turkish Minister for Youth and Sports Akif Çagatay Kiliç has confirmed the country will bid for the 2022 Ryder Cup and intends to build a new course to host Europe’s match against the United States.

Kiliç addressed the world’s media on Thursday shortly after the second Turkish Airlines Open by the Ministry for Youth and Sports got underway.

He says that Turkey’s exceptional record of hosting tournaments and other iconic sport events, allied with a fast-growing passion for golf makes the country a perfect venue for the biannual competition. Kiliç believes the entire nation would be behind attempts to bring the prestigious tournament to Turkey.

Austria, Germany, Italy, Portugal and Spain are also in the running to host the event in eight years’ time.

Kilic said: “Turkey has been successful in hosting a lot of international events, sports events, other kind of events. We do not have any shortcomings or doubts in our mind that we would be able to do it.

“Now, I have talked to Mr. Ağaoğlu who is in charge of the Turkish Golf Federation, and there are certain things that might have to be supported by the government. We are more than happy to do that. But I don’t think that it will harm us in any way to pursue our work, which has already been done until today, for 2022.

“But there’s always ‑‑ this is a race. I mean, in the end, it’s a bid. There’s competition. But I don’t think that we will shy away from anything that is put in our way.”

Kiliç says that the necessity of building a new course would not stand in the way of Turkey’s bid.

He also feels that attracting the Ryder Cup would take Turkey’s standing in the global game to an even higher level.

Kiliç added: “There is a need to have a course which can answer the requirements of The Ryder Cup.  We have to have one like that but it’s not a hard thing to build one.

“We are at the world agenda in golf, and we know that people are coming to Turkey from all kind of places around the world to play here, and are enjoying it.”