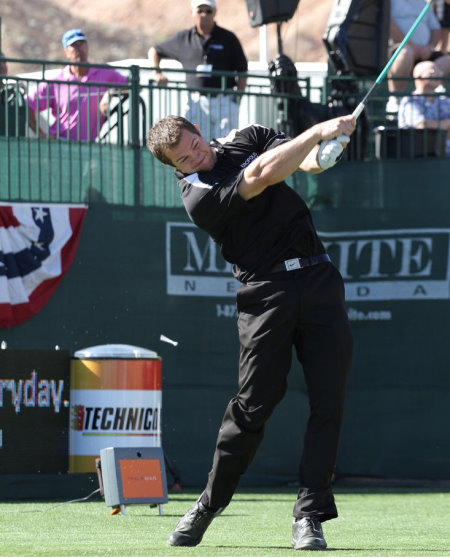 Long Drivers of America (LDA) has announced today TrackMan™ has agreed to be the Official Club and Ball Flight Data technology for Golf Channel telecasts of the RE/MAX World Long Drive Championship through to 2015.

Trackman™ has added a dramatic new dimension to televised golf coverage, providing real-time data on club speed, ball speed, spin rates, carry distances, and more, as well in using superimposed 3D graphics to show ball flight and trajectory.  “This is another step forward in the evolution of the RE/MAX world finals,” said LDA chief executive officer Art Sellinger. “To have Trackman™ technology involved will not only enhance Golf Channel telecasts, it will provide spectators and competitors at Mesquite Regional Sports and Events Complex and Las Vegas Motor Speedway with immediate and meaningful data on competitors’ swings and six-ball sets.”

The RE/MAX World Long Drive Championship, the premier event in power golf, will be featured in a series of telecasts throughout October for what is being billed as Long Drive Month on Golf Channel.  New RE/MAX WLDC shows will debut every Wednesday starting on October ninth, culminating with the LIVE two-hour finale October 30, 2013 at 9:00pm ET.

“TrackMan™ is pleased to continue our involvement with the RE/MAX WLDC. The 2013 championship will mark the 5th year TrackMan™ has been onsite to measure club and ball flight data for the event. With the announced move to the Golf Channel and additional coverage of the competition, it will allow TrackMan™ to further show how impressive these athletes are, ” said Justin Padjen, Business Development for TrackMan™.

“Using TrackMan’s research over the last 10 years, it is easy to show these competitors are the outliers when it comes to physical ability. The precision that is necessary to control the trajectory and dispersion of a golf ball traveling over 220 mph is fascinating,” continued Padjen.  “A quarter degree change in data such as Dynamic Loft or Face Angle can easily be the difference in taking home the quarter million dollar grand prize or not.”

Sellinger added: “We are pleased to have the industry leader continue as our partner.  Having TrackMan™ document the incredible swing speeds and ball speeds that RE/MAX World Champions like Ryan Winther and Jamie Sadlowski register continues to be spectacular.”

“We look forward to contributing to the continued growth of the RE/MAX WLDC and the LDA. Through the use of TrackMan’s industry leading technology, we can continue to generate accurate and reliable data for these athletes that push the limit as to what is possible in long driving,” said Padjen.

Sustainable golf brand OCEANTEE has become the first ever sports brand to be recognised by The Global Good Awards.