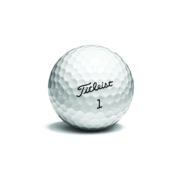 When this year’s Open Championship tees off at Royal Liverpool Golf Club between 17th-20th July, Titleist will continue another remarkable success story, being the overwhelming golf ball of choice at golf oldest Major championship since records have been kept. Alongside this, Titleist golf balls have been proven as the #1 golf ball of choice across all levels of the game, leading the counts at some of the most historic Amateur events in the world, including this year’s British Amateur Championship, Lytham Trophy and St Andrew Links Trophy. These impressive counts underline the excellence of Titleist golf balls and their performance superiority for players across all levels of the game.

Titleist golf balls completed a clean sweep of golf ball counts at the Majors in 2013, and have continued their dominance throughout 2014 at The Masters and U.S. Open. This includes the continuation of the longest running success story in golf at the U.S. Open, where Titleist golf balls have been the most played at the U.S. Open for 66 years, stretching back to 1949. These impressive counts also mirror those seen week-in-week-out across worldwide professional tours, with over 13,595 players across worldwide professional tours choosing to put their trust in the feel and consistency of a Pro V1 or Pro V1x so far in 2014, more than six times the nearest competitor with 2,195. The legendary Pro V1 franchise has also recorded a stunning worldwide win count of 95 so far this year, compared to 22 for the nearest competitor.

The superior performance of Titleist has further been proven in the amateur ranks, where the legendary Pro V1 franchise has been the overwhelming choice of competitors in the most prestigious amateur championships this year. With a place at this year’s Open Championship at stake, 228 of the competitors at The Amateur Championship put their trust in a Titleist golf ball, more than six times the nearest competitor with 36. At the Lytham Trophy, 111 of the 144-player field chose to tee it up with a Titleist, compared to 22 for the nearest competitor, and at the St Andrew Links Trophy, 101 of the 144 competitors placed their trust a Titleist golf ball.

Visit www.titleist.co.uk for exclusive Titleist content throughout the 2014 Open Championship.