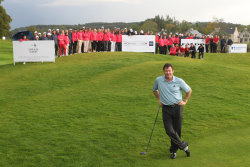 Britain’s top young golfers may register now to enter one of nine UK Championships on the 2011 Faldo Series Europe schedule. Entries must be submitted by 7th March by logging on to www.nickfaldo.com.

The five winners at Lough Erne will then be invited to the Faldo Series Asia Grand Final, to be staged at Mission Hills Golf Club, China, in March 2012.

Both Grand Finals will be hosted by Sir Nick Faldo, founder of the Faldo Series, and played on courses designed by the six-time Major Champion.

This year’s Faldo Series Europe comprises a record 18 qualifying tournaments in 12 different countries, with nine events across England, Scotland and Wales, one in Ireland and others being played as far afield as Bahrain, the Czech Republic, Russia, The Netherlands, Greece, Brazil, Germany and Slovakia.

Open to boys and girls born in 1990 or later, the UK leg of the 2011 Faldo Series Europe starts with the 36-hole Faldo Series UK Championship at Moortown GC, Yorkshire, on April 6-7.

Prospective competitors can enter any of the Faldo Series UK Championships by logging onto the new on-line entry system at www.nickfaldo.com and following the simple instructions. Entries close on February 28, 2011. The cost of entry is £70 which includes a practice round and 36-holes of competition at the selected venue.