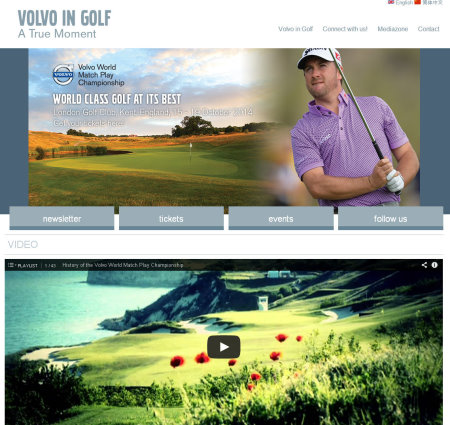 Advance discounted tickets for the first Volvo World Match Play Championship to be played in the UK since 2007, over the acclaimed International Course at London Golf Club in Kent, are now on public sale.

The return of the event to UK soil in its 50th anniversary year looks certain to create an exciting atmosphere as a high quality 16-man field including defending champion, Graeme McDowell, and World Number Two, Henrik Stenson, tackle the head-to-head format which captured the public’s imagination when Arnold Palmer won the inaugural title at Wentworth Club in 1964.

This year’s Championship, run in conjunction with Volvo, IMG and The European Tour, will be played from October 15-19 with a prize fund of €2.25 million and a first prize of €650,000, and anyone making their ticket purchases before midnight on September 22 will be able to take advantage of substantial savings on gate prices.

Adult season tickets for all five days of the action plus the pre-event Pro-Am, are priced at £70 (£55 concession) before September 22 and £90 on the gate (£70 concession).

The elite field will qualify via revised criteria and will be split into four groups of four in the group stages before the leading 2 players per group proceed to the knock out phase to be played over the weekend. The tournament will now be played over five days starting on Wednesday.

The Championship, begun by Mark McCormack and IMG in 1964 and organised together with Volvo since 2009, will generate worldwide media coverage, with over 2,000 hours of golf broadcast to half a billion households, has evolved considerably since moving from Wentworth in 2009, successfully securing a world-class field by qualification on merit and revising the format. Last year the Championship was the first full European Tour event to be played in Bulgaria at Thracian Cliffs with the three previous editions held at Finca Cortesín in Spain.

Hospitality packages in the bespoke deluxe Match Play Club overlooking the 18th green are also now on sale with packages starting from £250. Hospitality can be booked by contacting Lauren Fyfe at lauren.fyfe@img.com

Tickets are available NOW on www.europeantour.com/tickets

TaylorMade Golf has launched an all-black version of its P790 iron that will be at retail from April 23.