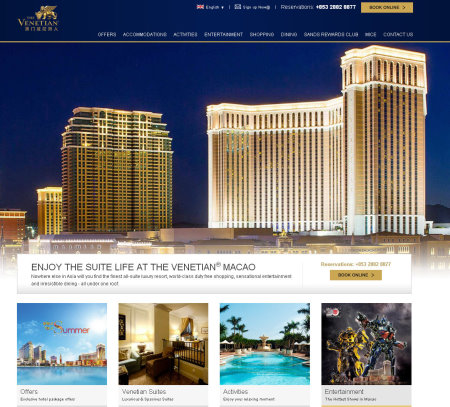 Golfer Ernie Els and The Venetian Macao® Resort-Hotel have created a partnership with the goal of continuing the growth of golf in Asia. Els, a 70-time winner internationally, is wearing The Venetian Macao logo on his right collar, back of hat and back yolk at this week’s U.S. Open, a tournament he won in 1994 and 1997.

“I’m so excited to represent The Venetian Macao,” Els said. “As a global player, I have travelled the world my entire career and I can say with certainty that it is one of the most extraordinary, elegant and atmospheric resorts I have visited. It’s luxurious and comfortable, but lively at the same time – it’s my kind of place and thankfully this partnership gives me an excuse to return frequently!”

Els – an Asian Tour ambassador – will also assist in marketing and promotion of the Venetian Macau Open, an Asian Tour event slated to tee off for the 16th time from October 23-26 at Macau Golf & Country Club. The Venetian Macau Open is promoted by IMG and 2014 is the third successive year The Venetian Macao has title sponsored the event in line with its long-standing objective of establishing Macau as Asia’s leading business, leisure and entertainment destination. Since its inauguration in 1998, Macau Open has welcomed top names like Lee Westwood, Colin Montgomerie, Nick Faldo, Fred Couples, Vijay Singh, Padraig Harrington, Thongchai Jaidee, and, in 2013, Els.

“My first experience with the Venetian Macau Open was last year and I’m going to play the tournament until they tell me to stop coming!” Els said. “I could not quite claim the victory in 2013 and I’m looking forward to taking another crack at it. This is a tournament that will succeed in growing and developing golf in Asia – particularly in Macau – and it will become a true centerpiece of the Asian Tour.”

Els is a four-time major championship winner – including the 1994 and 1997 U.S. Opens – and a 2011 World Golf Hall of Fame inductee. A former World No. 1, Els’ resume also includes two World Golf Championships and seven World Match Play titles. Considered one of the most prolific winners of his generation, the global reach of his victories is almost without parallel.