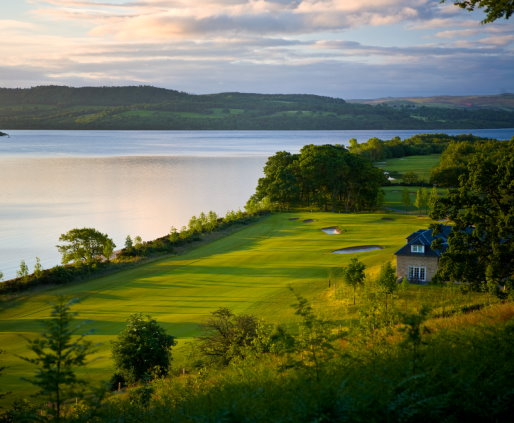 De Vere’s stunning Carrick on Loch Lomond has been selected to host the European leg of the lucrative Million Dollar Invitational. The venue is a past host of the Ladies Scottish Open and PGA Cup Matches, so will bring a wealth of tournament experience to the inaugural event, which runs from 2nd – 8th of September. The innovative format begins with a fifty-four hole qualifier to determine the ten players that will go head-to-head in a nine-hole shootout over the course’s picturesque back-nine, with the winner claiming a life-changing $1 million first-prize. The tournament is open to both amateurs and professionals and will be televised live around the world by American TV Network CBS.

“We’re delighted to have been chosen to host the first Million Dollar Invitational. The tournament not only underlines the rapid progression of our championship course but will headline a host of exciting events throughout 2012 in celebration of our fifth anniversary,” commented Ross Whitfield, General Manager, The Carrick Golf Club onLoch Lomond. “The successful completion of irrigation work in May 2010 has the course is in great year-round condition, which will provide a truly breath-taking backdrop for the players and the worldwide TV audience.”

The unique nine-hole million dollar eliminator final will see the highest scoring player on each hole leave the competition, with ties separated by ‘made for TV’ skill challenges. The sole survivor will therefore be left to scoop the $1million first prize on the 18th green, marking the culmination of several regional pre-qualifying stages throughout theUK. A large purse at every stage of the competition means it is high-stake golf from start to finish.

Other events throughout the week include The World Putting Championships and a Celebrity Challenge Pro-Am. Both events will also feature lucrative prize-money and guarantee interesting TV viewing for the spectators at home.

During the Invitational, players and spectators alike will encouraged to sample the delights of the De Vere Cameron House Hotel, an elegant five-star baronial mansion that accompanies The Carrick golf course. The stylish resort, voted ‘Best Hotel inScotland’ at the 2009 Golf Tourism Scotland Awards, reinforces the championship hosting credentials of The Carrick. There are a myriad of on-site activities available from Quad Biking to Loch Cruises, as well as the opportunity to enjoy the inspirational accommodation throughout the verdant grounds of the striking mansion. The impressive experience on offer at Cameron House will contribute to a five-star championship from start to finish.