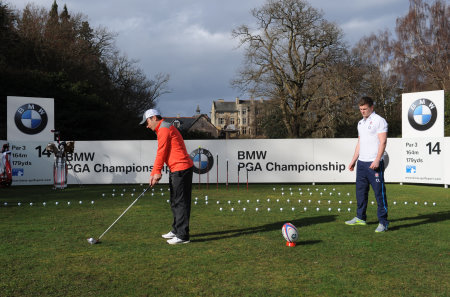 As proud partner of both England Rugby and the PGA Championship, BMW recently staged a sporting challenge with a difference, as some of the biggest names from the worlds of golf and rugby came together for the BMW Trick Shot Challenge.

After taking on Barrington’s ‘Double Handed Scissors Shot’ and the infamous ‘High Tee Challenge’, Molinari challenged the players to a trick of his own – the Happy Gilmore.

Click BMW Trick Shot Challenge to see how the players got on.

Speaking after the event, Molinari commented: “It was a fun day! Unfortunately, we don’t get the chance to try trick shots too often, so it was a bit of a challenge. But meeting the rugby guys was great and the day was a lot of fun.”

One player who is keen to attend this year’s BMW PGA Championship is Ben Foden: “I would love to get down to Wentworth this year. It’s unbelievable to see what the guys at the top level can do with the ball. It’s great to watch other professional sportsmen performing at the top of their game, so it would be a great day out.”

Peter Walker, General Manager, Partnerships and Sports Marketing, BMW UK, said: “BMW are partners with both the BMW PGA Championship and the RFU, so it was great to see two of our sporting properties come together for this fun event.  Everyone really enjoyed it and I know the rugby players were impressed by the golf skills from Francesco and Paul. Chris Robshaw played in the BMW PGA Celebrity Pro Am last year, so it will be interesting to see if Owen, Ben, Joe or David follow in his footsteps.”

The BMW PGA Championship is the European Tour’s flagship event, featuring many of the world’s leading players. Looking ahead to this year’s tournament, Molinari continued: “The BMW PGA Championship is a great event; one that all the European players look forward to. It attracts a large and very knowledgeable crowd, which the players look forward to playing in front. It’s one of the many reasons it attracts the big players.”

The BMW PGA Championship offers six days of high quality entertainment, including Official Practice Day, Celebrity Pro-Am and four rounds of compelling competition from May 20-25. Tickets are available on: www.europeantour.com\tickets