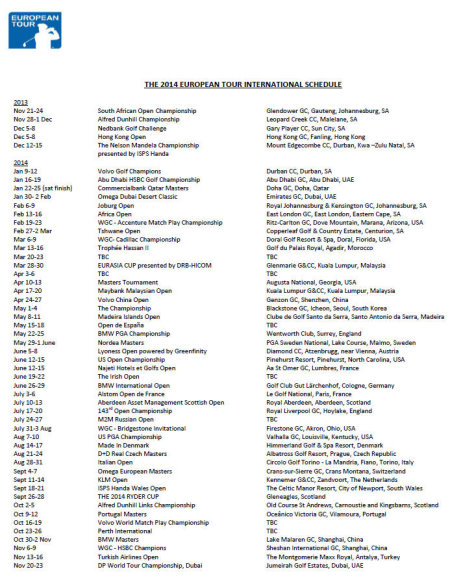 The 2014 European Tour International Schedule features a minimum of 48 tournaments in 26 different destinations and once again emphasises the Tour’s desire to deliver world class golf around the globe.

The 12 month golfing odyssey, which begins next week with the 103rd playing of the South African Open Championship in Johannesburg, travels across all five continents before the curtain comes down once again with the DP World Tour Championship, Dubai, at Jumeirah Golf Estates, from November 20-23, 2014.

The DP World Tour Championship, Dubai, is also, once again, the culmination of the four-tournament Final Series which, as with this year, will also feature the BMW Masters and the WGC-HSBC Champions in China and the Turkish Airlines Open in Antalya.

Other highlights include two new tournaments in a row in August – Made in Denmark at the Himmerland Golf and Spa Resort on August 14-17 and the D+D Real Czech Masters at the Albatross Golf Resort in Prague from August 21-14 – while also featuring on the schedule for the first time is the Nedbank Golf Challenge in South Africa from December 5-8.

Outside the 48 regular tournaments, the 2014 schedule also features The 40th Ryder Cup at The Gleneagles Hotel in Scotland from September 26-28 – whose final counting event will be the Italian Open at Circolo Golf Torino from August 28-31 – and the first staging of the new match play event between Europe and Asia – the EurAsia Cup presented by DRB-HICOM at the Glenmarie Golf and Country Club in Kuala Lumpur, Malaysia, from March 28-30.

Keith Waters, Chief Operating Officer and Director of International Policy for The European Tour, said: “I am delighted with our 2014 schedule which perfectly showcases not only the renewed strength in depth of The European Tour, but also our influential global footprint.

“There is no question that we have come through a challenging period economically and for that we must thank the continued commitment and dedication of our tournament promoters and sponsors, not only in our home continent of Europe, but throughout the world.

“Their collective conviction in our brand has given us the confidence to drive The European Tour forwards with genuine optimism for the future, optimism which will see us continue to grow and positively develop the schedule into 2014 and beyond.

“We maintain superb relationships with fellow Tours and Federations and nowhere more so than in South Africa, where the first appearance of the Nedbank Golf Challenge on our schedule is one of eight tournaments in that country in the 2014 season.

“We thank everyone at the Sunshine Tour for their co-operation and we look forward to working with them, and all our business partners and colleagues across the world.”