TGI & Foremost go head to head at The Grove 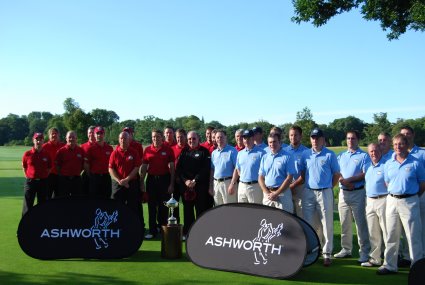 The second annual Ashworth Cup took place on 15 August at The Grove, Hertfordshire, the venue of the only World Golf Championship that has been held on English soil.

The Ashworth Cup is contested between professionals from TGI & Foremost Golf, the two largest buying groups in the UK & Ireland, in a Ryder Cup style format of 6 fourball matches and 12 singles matches.

TaylorMade-adidas Golf sponsored the event through the Ashworth brand, providing all competitors with Ashworth team uniforms for the event.

Ashworth Staff and European Tour Professional Paul McGinley was on hand to share his golf experiences and some stories about team competition with the competitors, adding to the Ashworth brand experience that was prominent throughout.

The first contest was held at the K Club in 2010 and saw TGI run out as the inaugural victors. This year at The Grove, Foremost were victorious by a resounding margin of 11½ – 6½, tying the overall score at 1-1. Next year’s qualification process for both teams is likely to be extremely competitive as both have the opportunity to edge ahead in the overall standings.