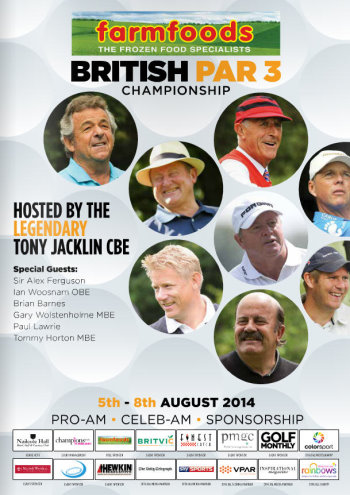 Hosting the championship for the sixth year running is two-time Major winner and the most successful Ryder Cup Captain of all-time, Tony Jacklin CBE. With the 2014 Ryder Cup just around the corner, the championship is lucky enough to welcome current Vice-Captain Des Smyth to Nailcote Hall, Warwickshire, as well as other former players including Brian Barnes, Peter Baker and Paul Broadhurst.

The Farmfoods British Par 3 Championship – 5th to 8th August –  is home to some of the powerhouses of European golf including former Masters Champion and victorious Ryder Cup Captain Ian Woosnam OBE. Making his Nailcote Hall debut is former Open Champion Paul Lawrie OBE, who played a role in helping Europe regain the Ryder Cup in 2012 and has enjoyed an impressive resurgence in golf in recent years.

Some of the current stars of the European Tour that will be battling it out for their share of the £100,000 prize fund include Robert Rock and Lee Slattery. Rising women’s golf star Charley Hull has enjoyed an incredible debut season on the Ladies European Tour and will also be looking to make a big impression at the championship.

The Par 3 format provides a stern test of any golfer’s short game, and any of the competitors could storm through to take the title on their day. With such an impressive field, the Farmfoods British Par 3 Championship is certain to be a closely fought contest between some of golf’s great competitors.