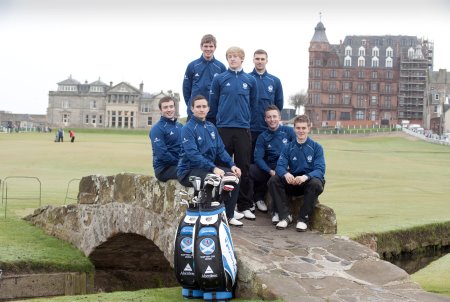 The Scottish Golf Union has extended its partnership with TaylorMade-adidas Golf by signing a ground breaking four-year sponsorship agreement to support the Scotland national golf squads.

Having worked in partnership with TaylorMade-adidas Golf since 2001, the new agreement will see the Scotland team at Men’s and Boys’ level wearing adidas apparel and footwear at international events until the end of 2016, with continued supply of TaylorMade equipment and accessories for squad players at national level.

Both brands will be represented alongside Aberdeen Asset Management as the SGU’s Official Scotland Team Partners, with squad players also benefitting from additional support and advice from the world leading TMAG staff team.

TaylorMade and adidas are recognised as two of the world’s leading golf brands and are marketing leaders across a number of categories within the golf industry,

TaylorMade, the No.1 driver in golf, has led the golf industry’s technical evolution since being founded in 1979. In 2012, TaylorMade once again led the way with the introduction of the R11S Driver and RocketBallz Fairway Wood. The R11S, featuring the renowned all-white head provides the golfer with the ultimate in adjustability thanks to its Flight Control Technology (FCT) sleeve, Adjustable Sole Plate (ASP) which allows the golfer to find their optimum address set-up and Movable Weight Technology (MWT) which enable the golfer to be able to adjust shot shape. The R11S driver can be tuned for 80 separate launch settings, making it the most adjustable driver in golf.

Representing TaylorMade-adidas Golf at the sponsorship launch inSt Andrews, the company’s Sports Marketing representative and Amateur Programme Manager Matt Blackey said: “We have enjoyed a great relationship with the Scottish Golf Union over a long period of time and they, along with their teams and players, have proved to be fantastic ambassadors for our brands.

“The SGU has consistently delivered excellent coverage for us inScotlandand our new sponsorship deal underlines our long-term commitment to the Scottish amateur game.”

“The national team has enjoyed some good success in recent years, most notably the Home Internationals win this year, and we look forward to helping the squads develop and supporting the exciting young talent coming through the ranks,” he added.

Ross Duncan, Marketing and Sponsorship Manager for the Scottish Golf Union, said: “We are delighted to extend our sponsorship with TaylorMade-adidas Golf through to the end of 2016, which is our longest-ever partnership agreement. They are the leading brands in golf and also two of the most innovative so it is a major coup for the SGU to have such a long-term commitment.

“They have provided fantastic support for the past 12 years, not only through provision of kit and equipment for our national teams, but significant added value in many other areas. Having an association with world class brands also helps us attract other sponsors and I’m confident we will be adding to our portfolio in the months ahead.”