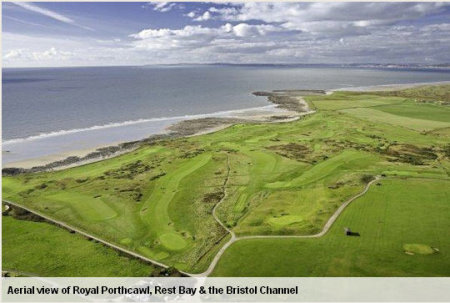 Following Mark Wiebe’s victory in this year’s Senior Open Championship Presented by Rolex at Royal Birkdale, the baton has now been passed to Royal Porthcawl as Wales prepares to host its first Major Championship in 2014.

The famous links in Bridgend, South Wales, will become the 12th different venue to host a Senior Open Championship, when it stages the 28th edition from 24-27 July 2014.

Tickets are now on sale via www.senioropengolf.com for the 2014 Senior Open Championship, giving golf fans the chance to see some of golf’s most iconic names in action and witness this historic maiden Major to be played on Welsh soil.

Colin Montgomerie, the man who led Europe to Ryder Cup glory at The Celtic Manor Resort three years ago, made his debut in the event, while Corey Pavin, his American counterpart in that contest, finished in a tie for third place.

The spotlight will now shine on the country again, with preparations already underway for Royal Porthcawl’s first staging of the Senior Open.

Johnnie Cole-Hamilton, Executive Director – Championships, at The R&A, said: “After the success of this year’s Senior Open Championship Presented by Rolex at Royal Birkdale, we are now all looking forward to visiting Wales for the first time when Royal Porthcawl hosts the 2014 edition.

“Royal Porthcawl is another magnificent links venue and one all of the players will relish playing next year.”

As part of the agreement between the Welsh Government, The European Tour and The R&A, The Senior Open will return to Welsh shores on two further occasions between 2015 and 2024, on dates yet to be confirmed.

It follows the successful staging of The 2010 Ryder Cup at The Celtic Manor Resort, City of Newport.

Advance tickets for The 2014 Senior Open Championship can now be purchased, with special pre-Christmas discounts available.

Tickets can be bought online via www.senioropengolf.com or by calling +44 (0)800 0232557, with details of hospitality packages also available.

European Ryder Cup Captain Pádraig Harrington has added Henrik Stenson to his roll call of Vice Captains for the 43rd matches which get under way at Whistling Straits next Friday.